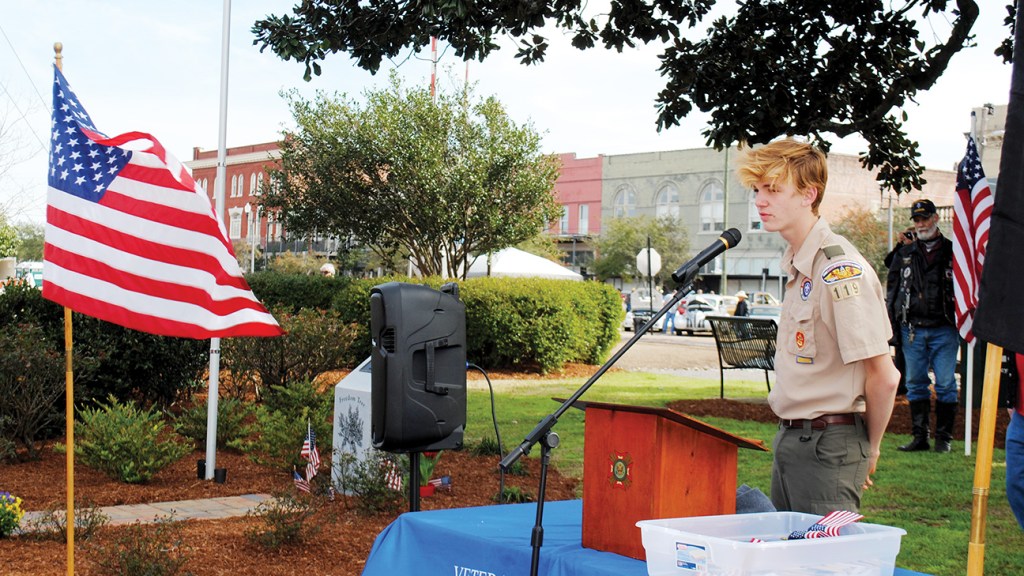 Photo by Aaron Paden Jake Thompson leads the pledge of allegiance at the rededication of the Danny D. Entrican Memorial Saturday. Entrican was listed as MIA in 1973. Thompson renovated the memorial as part of his Eagle Scout Service Project.

It was a solemn gathering in downtown Brookhaven Saturday as the Veterans of Foreign Wars held a rededication ceremony for the Capt. Danny D. Entrican memorial in Railroad Park at the corner of Cherokee Street and Whitworth Avenue.

Entrican was a Special Forces reconnaissance patrol leader his team. On May 8, 1971, his team was inserted in the Da Krong Valley in Thua Thin Province in South Vietnam. Three days later, he was wounded in a firefight and is thought to have been captured after urging his team to try and make a chopper pickup without him.

Entrican’s cousin Kim Henderson was asked to speak at the rededication. She said she was just 5 years old when her cousin was listed as missing in action. She said that for much of her life, Entrican was a face in faded photographs, but the people of Brookhaven never forgot him.

“Brookhaven cared about their hometown hero,” she said. “They held out hope he would come home.”

“Like most Eagle Scouts, Jake didn’t want any credit for the project,” Scout Leader Jeffrey Kellum said. “He wanted it to be something for the community — something permanent. And this is what he chose to do.”

Thompson said becoming an Eagle Scout has been a dream of his since he joined as a Tiger Cub when he was just 6 years old. Thompson led the gathering in the pledge of allegiance during Saturday’s rededication ceremony.

“Whenever I saw the memorial, it really wasn’t looking like it deserved to look,” Thompson said. “It was just a stone marker in the ground, and the bed wasn’t extended so it was just sitting in the grass. I thought it deserved better.”

It’s a project that has been a long time coming, according to Thompson. There are several stages to getting an Eagle Scout service project approved, and it also required getting approval from the Brookhaven Board of Aldermen.

“There’s a lot of work that goes into it,” he said.

Thompson said that being an Eagle Scout is a lifetime commitment, and his journey as a scout is not over.