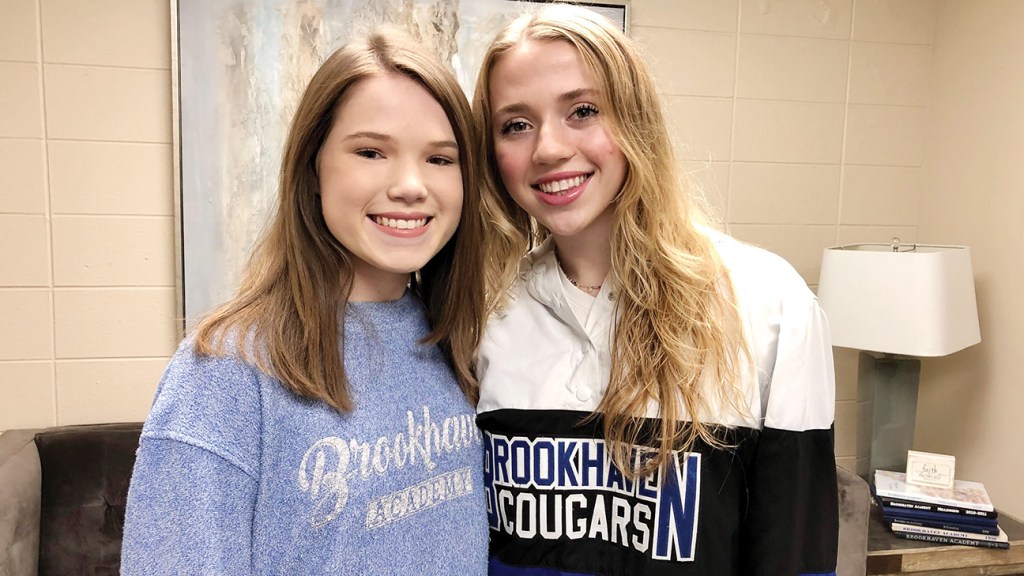 File photo BA students Emily Hood and Lucie LeBlanc were selected “Best in Fair” at the USM District Fair in January, and now advance to the International Science and Engineering Fair in Los Angeles. Pictured are, from left: Hood and LeBlanc.

Two students of Brookhaven Academy heading to the big leagues of science. In May, Emily Hood and Lucie LeBlanc will attend the International Science and Engineering Fair in Los Angeles to compete with more than 80 countries for more than $5 million in prizes.

In addition to the potential for prize winnings, Leslie Hood — Emily’s mother and also a science teacher at Brookhaven Academy — said the students will also be competing for the attention of Ivy League recruiters. Hood said she couldn’t be prouder of her daughter.

“She spent last summer and the rest of the school year developing her research project,” she said. “She’s set her sights on this since she was a seventh grader.”

Emily Hood and Lucie LeBlanc were chosen as “Best in Fair” at the USM District Fair in January. There are seven districts in the state, and each district will have an opportunity to send students.

“We have a local fair at Brookhaven Academy,” Leslie Hood said. “Public school, private school and home school — any kid can come and present. They are judged by real scientists and asked extremely difficult questions.”

The students will also compete in a state-wide competition at Delta State University April 3, which will give participating students an additional chance to be chosen for the international competition, but the district winners have been chosen.

Both students have been to the International Science and Engineering Fair before, and LeBlanc participated in the competition last year in Arizona. The science projects at this level require a great deal of research. Emily Hood said for this year’s project she is studying the effects of varying levels of carbohydrates on the growth and locomotion of fruit flies.

“This is real science that they’re doing,” Leslie Hood said. “This is stuff graduate students are working on.”

LeBlanc is studying the effects of oxygen on the virulence of listeria.

“I found that by limiting oxygen to listeria, it makes listeria weaker,” she said. “So we can start to create antibiotics to kill listeria.”

LeBlanc said science fairs, which also include engineering projects, are a great opportunity to experience real research and explore ideas.

“The science fair brought me where I am,” she said. “It’s kind of self-interest, too — having competitions and being motivated to do more.”

LeBlanc said her work for the science fair has inspired her to go into chemical engineering after graduation. Her interest in research was sparked by an assignment from Leslie Hood in 10th grade, where students would pick a topic that interested them and they would write research articles about them. She chose probiotics, which ultimately led her to unanswered question the effects of probiotics from commercial yogurts on pathogens. That was the project that brought her to the international competition last year.