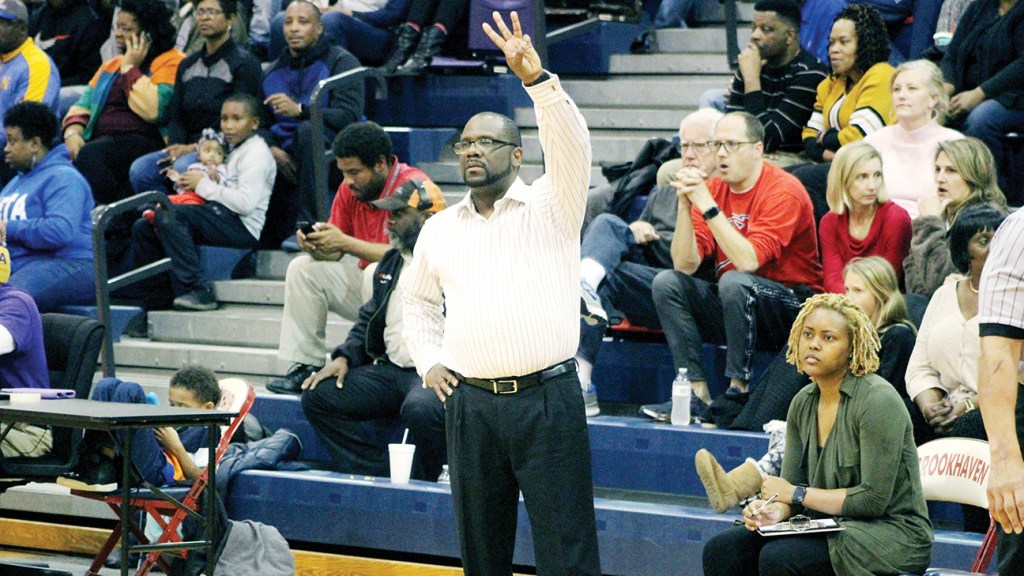 Photo by Cliff Furr Brookhaven High coach Preston Wilson is The Daily Leader 2020 All-Area Coach of the Year after taking Ole Brook to the 5A state title game.

“I know that we will be in a rebuilding stage, but I want us to be competitive every time we take the floor,” said Wilson at the time.

The Ole Brook Lady Panthers have gone from competitive to feared as they finished this season 28-4 and MHSAA 5A state runners-up. For his efforts Wilson has been named The Daily Leader All-Area Coach of the Year.

That first season for Wilson as the head girls’ coach was the ground floor of the rebuild as the Lady Panthers finished 3-24. They were 14-14 the next season and a combined 79-13 over the last three seasons.

A standout high school athlete, Wilson was part of two state championship basketball teams as a student-athlete at Gibsland-Coleman High (Louisiana). He then went on to play baseball at Louisiana Tech.

Wilson came to BHS as an assistant in 1994. He was head boys’ coach for six seasons during his first stint at the school, posting a 149-51 record and winning three division titles while taking his team to the state tournament in the Mississippi Coliseum three times.

In 2001 he left to be head coach at Warren Central where he worked for two years. Wilson then moved across state lines to coach at Woodlawn High in Shreveport for three seasons.

Wilson came back to this part of the state in 2006 when he took the head boys’ job at Lawrence County. He was there three years before returning to coach the BHS boys beginning with the 2009-2010 season.

Making the move to coach the girls was partially influenced by his son Darrian. With Darrian about to be a senior in 2015, Wilson wanted to be able to enjoy watching him his final season. When Freda Craft stepped down as head girls’ coach Wilson slid into her role and his assistant at the time — Jimmie Butler — became the head boys’ coach.

Darrian just finished his final season playing for the Jackson State Tigers. He was an outstanding player at Copiah-Lincoln CC before going to JSU.

You might have seen Darrian on ESPN back in February when Jackson State had a post-game dustup with Prairie View as the two teams were shaking hands.

Darrian was in the middle of the action — playing the role of peacemaker, holding back his angry teammates, standing as a calming 6-foot-4 influence in the midst of chaos.

Like his dad, he’s been called to coach as well.

“I’ve told him that while he’s young he should chase that college coaching experience,” said the elder Wilson. “But I know he’ll coach high school one day. That’s what he wants to do, that’s what he loves.”

All the wins and titles and awards — it’s easy to see that Preston is most proud of the man that Darrian has become. Darrian’s mother is Betty Wilson-McSwain.

Preston Wilson knows what it’s like to feel a calling in your life like the one his son feels towards coaching.

For a long time, he fought another calling that tugged at his heartstrings. The son of a minister, Wilson felt the Lord calling him to preach.

Like many, though, he fought it, ran from it or tried to ignore it.

As his faith deepened as a parishioner at St. James Missionary Baptist Church, Wilson finally surrendered to that call.

“It was a constant battle,” said Wilson. “The Lord was dealing with me for a while and I was stubborn, but eventually it becomes too much, and you’re forced to make a decision.”

Wilson served as an associate minister at his home church of St. James for three years before taking on the mantle of pastor at New Hope Missionary Baptist in the New Site community of Lincoln County.

A lot will be different for BHS next season. Gone will be a talented four player senior class that provided a lot of points, rebounds and wins during their time at BHS.

What won’t change for Wilson is he’ll still be there on the sideline — occasionally hollering, mostly standing and always coaching.

His wife Sonya will be seated in her usual perch behind the bench and he’ll be joined on the sideline by his staff of Tonya Johns, Christen Benson, Monte’ Wilson.

And don’t expect the Lady Panthers to be any less intense next year, in fact that full-court press might be better than ever.

“We’ve got some young players that really bring it on the defensive side,” said Wilson. “I expect our defensive intensity is going to be very high. We’ll need to score out of transition and off turnovers because our offense is going to be a work in progress — but I’m excited about what we’ve got coming back. They’ll be another fun group to coach.”