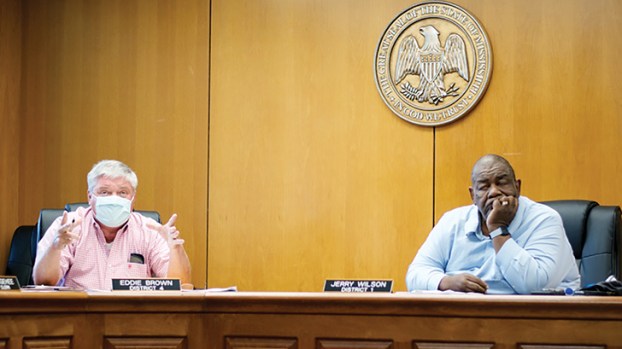 The need for personal protective equipment and concern over outbreaks topped the discussion in the latest meeting of the Lincoln County Board of Supervisors.

The board met Monday during their regularly scheduled meeting time and followed guidelines set by the Center for Disease Control by sitting at least six feet apart.

King’s Daughters Medical Center Chief Operating Officer Tom Hood presented an update before the board about COVID-19, expressing concern over the situation at hand.

Hood explained that if the situation escalates, then the hospital might not be able to take care of everyone. He said supplies of personal protective equipment could begin to run low for the staff.

The board then asked if KDMC could supply masks to city and county employees.

“We don’t have enough. We barely have enough for ourselves,” Hood said.

Emergency Management Director Clifford Galey addressed the board and gave an update of his own.

He explained that while he put in an order for personal protective gear such as masks, Lincoln County might not receive anything.

“Our national stockpile is totally depleted,” Galey said. “We’re on our own with this. The resources just aren’t there.”

Galey went on to discuss the rumor of there being an outbreak in a long-term care facility in Brookhaven. He said it was not a patient, but an employee. The name of the facility was not released.

“There are no cases in our long term care facilities,” Galey said.

He reported the most current case numbers from the Mississippi Department of Health, with 1,738 cases and 51 deaths being reported across the state.

“This stuff is spreading like wildfire,” Galey said. “We just need to stay aware.”

In other news, the following projects were given approval by the board:

• Payments six and seven paid to Oddee Smith Construction for work to be completed on Summers Road.

• A construction change request was made for county-wide reseal for overrun in asphalt and materials. Authorization was given to transfer state aid funds to this project.

• A utility agreement and permit for CSpire to install service fiber on Timberlane and Sunset Roads.

• A permit application for AT&T to service County Farm Road.

• Surveying of a property by I-55/Zetus Road.

• Meal Count sheets for the Sheriff’s Department for weeks 26 and 27.

Unemployment rate down for Lincoln County

Lincoln County had fewer unemployed people in February, though the labor force dropped a bit, as well. The labor force... read more