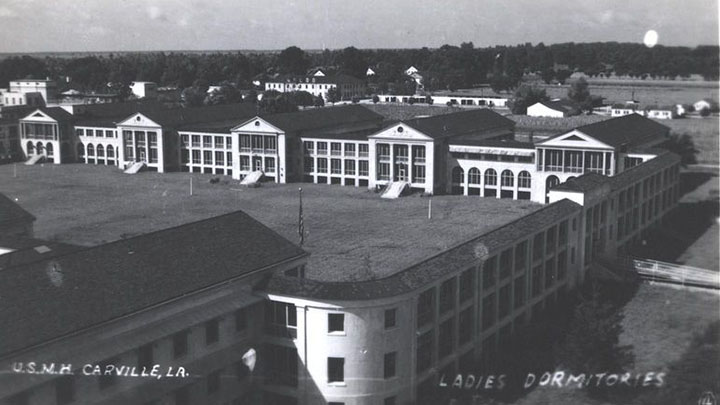 Photo by National Museum of American History The ladies' dormitories at the leprosarium in Carville, LA.

Writer’s Note: If any word has made a resurgence lately, it’s “quarantine.” But the truth is, whether used as a noun or as a verb, it’s really no stranger to the American vocabulary. This column is the second in a series related to a quarantine in our sister state that lasted nearly half a century. Please note leprosy is now called Hansen’s Disease.

Less than an hour’s drive south of Baton Rouge, two lanes of blacktop edge the Mississippi and wind by a chain of smoking chemical plants on the way to remote Carville, a neighborhood named for the postmaster grandfather of political commentator James Carville. Since 1999, the old leprosarium there has housed a National Guard installation, but the property, thick with live oak limbs that nearly kiss the ground, still holds enough history and nationally registered buildings to attract visitors from around the world. Usually the first person they meet is Elizabeth Schexnyder.

Nearly 20 years into her role as curator of the National Hansen’s Disease Museum, Schexnyder tells the leprosarium’s story with precision and the soft “r” characteristic of Louisianans — foward, not forward.  She starts in 1894 with the first seven leprosy patients arriving by barge, then she moves on to federal takeover, the Catholic Daughters of Charity’s rallying work and a self-sufficient population that grew to 450 in its heyday.

Schexnyder downplays a brief period in the 1990s when remaining patients shared their campus with minimum-security federal prisoners, but she admits the leprosarium had a “penitentiary atmosphere” during some of its existence. Patients couldn’t marry, couldn’t vote, couldn’t leave. For years that breach of dignity has beckoned BBC reporters and local students alike to the museum’s collection of oral histories, but Schexnyder says a certain kind of visitor shows up once or twice a month with specific research in mind: “They approach me and say that a relative was dying and told them a family secret. Their great-great-grandfather didn’t run off to Cuba or get mysteriously divorced or whatever they’ve always been told. He had leprosy, and we think he’s buried here.”

Carville was the only leprosarium of its kind in the continental United States. Thus, secret holders from coast to coast end up in a cemetery tucked away in the back corner of its grounds. Even with Schexnyder’s schematic and an open gate, though, finding the right headstone is hard. Each of some 750 government-issued markers bears a patient ID number and a death date, but the name curved along the top may have been changed to protect the families left behind. That was a common practice according to Schexnyder, and locals felt especially threatened: “One lady told me that after her brother was diagnosed and sent to Carville, she came to school and found her books and her desk thrown outside the building. They didn’t want her there anymore.”

With a leprosy legacy spanning both sides of her family tree, Anne Brett can top that story. When her mother was 12, she tested positive for the disease. Local authorities burned her family’s home to the ground.

Brett mentions that between bites of a club sandwich at DJ’s Grill, a lunch spot just across the river at Vacherie. Pointing to sugar cane fields outside the window, she smiles and says she grew up at the edge of one like them. Her parents paid a kind Cajun couple who couldn’t read or write to care for their children. “I got a journalism degree, and my brother is an engineer. I think they did all right,” she explains.

Brett’s parents wed while quarantined at Carville despite a U.S. Surgeon General’s mandate that patients not “hold communication” with patients of the opposite sex. When her mother got pregnant, officials sent her to New Orleans for delivery to keep Carville — and its stigma — off the birth certificate. Brett’s brother arrived in 1951, and she came along the next year. Each time, doctors placed the baby in an isolation unit until the Cajun couple could collect their new ward.

“That’s the sad part,” Brett says. “Mom not only had to give us up. She wasn’t allowed to touch us.”

Early on, the family would meet for secret picnics outside Carville’s fence. Although her father’s symptoms were minimal, Brett remembers her mother showed more physical features of the disease. Even after their release, fear of being contagious kept her parents at a distance. Her father prepared for his children’s weekend visits by scrubbing the bathtub with Comet and Lysol until his fingers were raw. Brett’s mother remained standoffish toward her grandchildren until she died.

Such misconceptions were understandable in the 1950s, but not now. Even though the effects of the disease may be chronic, leprosy isn’t a life-long condition. Once it’s treated, it’s part of a medical history.