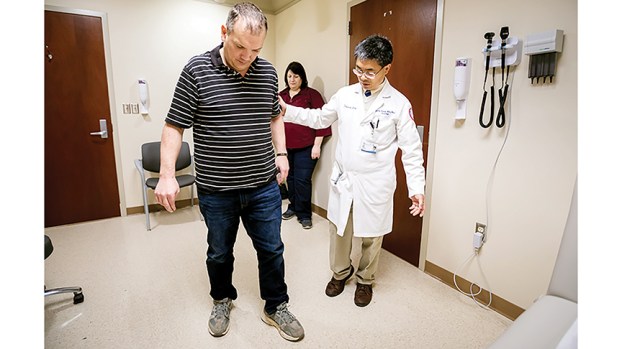 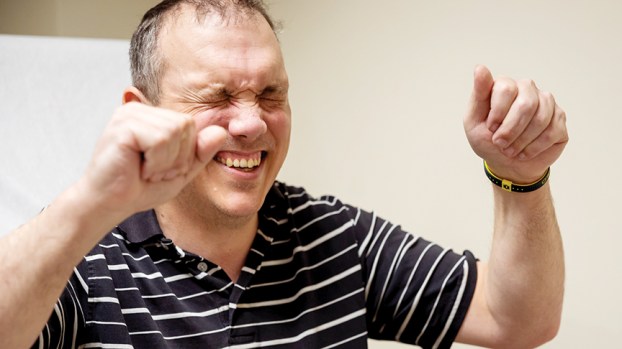 Photos by University of Mississippi Medical Center Communications Nathan Wilmoth goes through an exercise during a visit to UMMC.

A Lawrence County native couple is spreading awareness for Huntington’s disease simply by telling their story.

“Huntington’s Disease is one of those diseases that no one would talk about,” said Heather Wilmoth. Her husband, Nathan, battles the disease.

Huntington’s Disease is said to be like a combination of ALS, Parkinson’s disease and Alzheimer’s disease. It’s a disease that kills healthy nerve cells in the brain.

Symptoms of Huntington’s disease can include involuntary jerking or writhing movements, muscle problems, slow or abnormal eye movements, impaired gait, posture and balance and difficulty with speech or swallowing.

This disease is something Nathan Wilmoth has dealt with since his diagnosis in 2016. Heather said she remembers the day and how April 15 will never be the same.

“We were devastated, but we were lucky,” Wilmoth said. “There are lots of patients who haven’t been as lucky as us.”

With Huntington’s disease, it’s genetic. Wilmoth’s mother was the one who carried the gene for it. It usually develops mid 30s to late 40s. He was 36 when he was diagnosed. He is 42 now.

The Wilmoths didn’t notice Nathan’s disease in the beginning. He formerly worked as a diesel mechanic, and they began to notice his symptoms when he started dropping high dollar parts at work. He lost two jobs because of his condition.

“People don’t get it until they see it,” Wilmoth said. “No one knows what they’re getting.”

His wife often refers to the disease using inclusive language such as “we” or “us.” Because to them, it isn’t just her husband’s or their dad’s disease.

They’ve been married for more than seven years now.  They have two children; Gabrielle, 14, and Haden, 5.

Their children have a 50 percent chance of developing Huntington’s disease, but children can’t be tested for it until they’re 18 or if they begin showing signs of the disease.

After being diagnosed, the Wilmoths were unsure of what to do. Luckily, they were led in the direction of good doctors. They met their first doctor at the University of Mississippi Medical Center.

“We just felt so alone,” Wilmoth said. “We just wanted to find other people like us.”

They received information for the clinical trial conducted at the University of Alabama at Birmingham, and in Oct. 2015 they met Dr. Sung. Wilmoth applied to the trial when it opened in April of 2019, but he wasn’t accepted the first time.

“He knew that we were interested in doing clinical trials,” Wilmoth said.

The medication and the program were both revamped. After applying again, Wilmoth was accepted. He began the 25-month trial in July 2019.

“When they revamped, the program accepted us,” Wilmoth said. “It still felt like we had a death sentence, but then our outlook changed.”

The trial consists of three parts: all drug, all placebo and an alternation of the two.

The medicine is infused via spinal tap. Checkups consist of blood tests and cognitive questions.

Wilmoth also has to complete “homework” for his checkups that he receives on his phone. These include questions about his mood and daily life.

“We’re really hoping with the trial is that it’ll help some,” Wilmoth said.

The reason Huntington’s disease occurs is because there is a repeat in the CAG segment of an individual’s DNA. The CAG segment normally repeats 10-35 times.

“Everybody has the Huntington’s protein,” Wilmoth said. “No one talks about it.”

Anything 36 and above could mean developing Huntington’s disease.

“The higher the CAG, the earlier you’ll get it,” Wilmoth said.

“We’re trying to get the word out,” Wilmoth said. “I’m so passionate about it.”

The support group meets in Jackson on the second Saturday of every other month.

“If they have Huntington’s disease in their families, they should know they’re not alone,” Wilmoth said. “If it helps them by putting our story out, then it was worth it.”