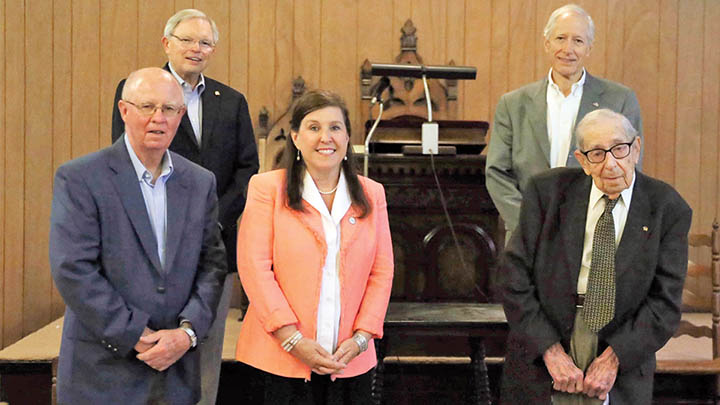 The former Wesson Presbyterian Church was recently gifted to Copiah-Lincoln Community College by George T. Mercier Jr., an elder of the church and clerk of the session for the past 45 years.

Wesson Presbyterian Church was founded in 1871 by Capt. William Oliver, a businessman from New Orleans who had moved to Wesson to manage the Mississippi Mills. The construction of the church was completed in 1878 and the congregation conducted its first worship service on March 24 that year.

“My mother and father were married here and I was baptized here so we have a long relationship with the church,” Mercier said while celebrating his 103rd birthday on May 8 in the church sanctuary with his son, G.T. Mercier III, and members of the college’s staff and Board of Trustees.

Throughout the years, the church has seen a rise and decline in attendance and membership, and during the summer of 2019, the congregation agreed that they could no longer maintain the church.

“Soon after that decision, I was given permission to pursue a potential candidate and Co-Lin became our first choice due to its proximity to the church. The sanctuary could be used as a chapel, and having the church placed on the National Register of Historic Places would be a prestigious landmark for the college and the community of Wesson,” Mercier said.

On March 15, the Wesson Presbyterian Church officially closed its doors as a church and will now function as a part of Co-Lin. After the church elders and congregation approved the transfer of the property to the college, the gift was unanimously accepted by the Co-Lin Board.

“We have a long history between the college and the town of Wesson – a history that we appreciate and hold with tremendous value. We’re going to take this gift and nurture it for some really special things in the future for both the town and for the college,” Co-Lin president Jane Hulon said. “We’re so grateful that the Mercier family looked to Co-Lin and entrusted us with such an important landmark of Wesson.”

In addition to this donation, Mercier and his son established the Dorothy Ragland Mercier Memorial Fund with the Co-Lin Foundation in memory of Mrs. Mercier, who passed away in December. The fund will be used for the improvement, maintenance and ongoing expenses of the chapel.

“My wife will always be remembered as a wonderful Christian who served the church in many capacities from teaching Sunday school, singing in the choir, leading the women’s Bible study group, as well as hosting various community organizations in the Wesson Presbyterian Church Annex,” Mercier said.

“I knew Mrs. Mercier through the Wesson Garden Club and thought the world of her,” Hulon said. “What a wonderful tribute and way to honor her life. We’re thrilled to have this opportunity.”

“The Foundation is grateful to the Merciers for this gift to be used to enhance and maintain the chapel,” said Angela Furr, executive director of the Co-Lin Foundation. “We are honored to celebrate Mrs. Mercier’s legacy through this special project.”

Contributions to the Dorothy Ragland Mercier Memorial Fund can be mailed to the Co-Lin Foundation at P.O. Box 649, Wesson, MS 39191, or made online at www.colin.edu/alumni-foundation/give-now.