90-year-old celebrates birthday with a parade 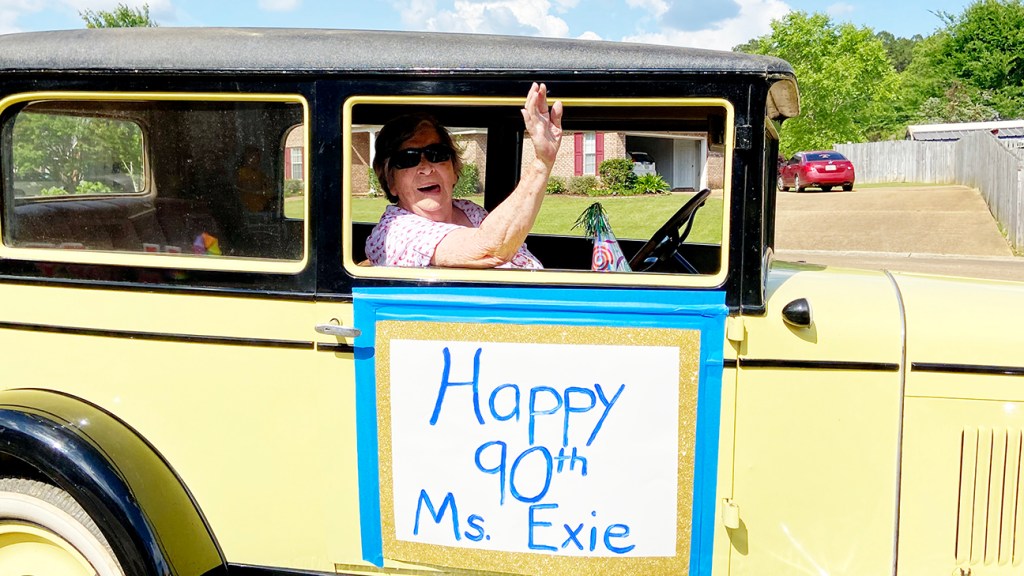 Photo submitted Exie Newton celebrated her 90th birthday Wednesday with a parade organized by and filled with family and friends.

A local nonagenarian was celebrated this week with a drive-by birthday parade.

Exie Jackson Newton turned 90 Wednesday and celebrated with her family, friends and neighbors. She says it was quite memorable.

“They really did a blast of a party for me,” Newton said.

Newton’s life follows the same pattern day after day. She starts off by waking up and fixing her coffee, and then sits on the porch with it. This is when she talks to her neighbors that walk through the neighborhood each morning.

“I’ve made so many friends out here just by sitting and watching them,” Newton said.

Newton doesn’t eat breakfast until about 11 a.m. After that, she watches television in her recliner and naps until around 2 p.m.

“I eat a good breakfast,” Newton said. “And then we meet out on the front porch again.”

She spends her afternoon doing the same thing; watching her neighbors and talking to them as they pass by her house.

As for her birthday, she wasn’t in on the surprise. Newton spent the entire day outside celebrating and taking it all in.

“From the very beginning of when I got up, I was going until about 8 o’clock at night,” Newton said. “The neighbors had put signs out in my yard and they had a sign hanging over the garage door.”

Newton saw neighbors and friends all day until the parade at four that afternoon.

“From then on, there were people coming and visiting,” Newton said. “It was really a blast.”

“They would always come and be with me,” Newton said, a mother of four. “I think that’s what I loved to remember. I won’t forget this one either, I can guarantee that.”

With turning 90, Newton has accumulated a lot of wisdom in living for nine decades. She’s said she’s learned wisdom from reading her Bible.

If she could give advice to those in her community, she wants them to trust in the Lord.

“I want people to lean on God and learn about Him,” Newton said. “Live life and be happy, feel the joy of Jesus Christ.”

Sharon Allen lives on Tanglewood Drive She walks in her neighborhood every morning, and that’s how she met Newton.

She and a few other neighbors organized the parade that took place on Jaywood Lane.

“It started out as a surprise, but she didn’t know how big it was gonna be,” Allen said. “She knew something was gonna be coming by her house.”

The parade featured family, friends, neighbors and even first responder vehicles. This included four police cars and a pickup truck from the fire department.

“It was definitely a success,” Allen said. “Just seeing the joy on her face, she was so happy.”

Allen hopes that Newton enjoyed her birthday despite the outbreak.

“She’s so good to everybody,” Allen said. “She’s such an encouraging person and we just wanted to give back to her.”