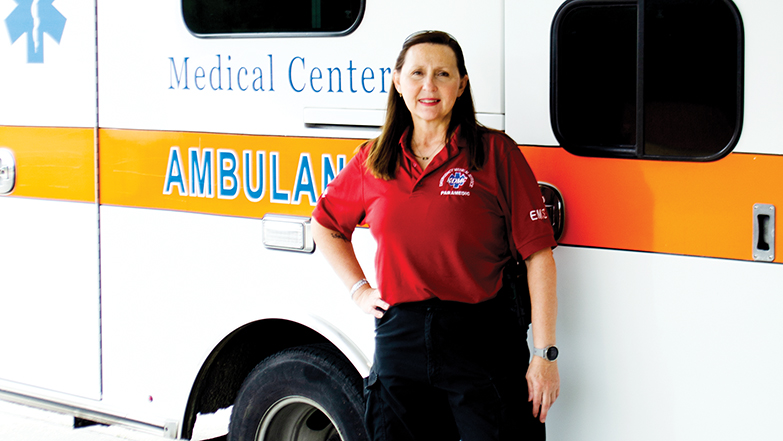 Alica Warren gives back to others through her work as a paramedic.

For the past 28 years, Warren has worked as a paramedic for King’s Daughters Medical Center. As a kid, she knew she wanted to go into a profession in the medical field.

“I had always wanted to do something to help people,” Warren said.

When Warren was younger, she watched the television show “Emergency,” where she saw men work as paramedics, but not women.

“Guys were paramedics,” Warren said. “Women were supposed to be nurses.”

Things began to change as time passed. Men weren’t the only ones working as paramedics now.

“As I got older, women had gotten into it,” Warren said. “That stigma was gone.”

Warren wasn’t sure if being a paramedic would be a good fit for her, but she tried regardless. She enrolled in the single semester class anyway.

She said that even if someone doesn’t become a paramedic after finishing the course, they’ve finished with a solid knowledge of first aid that could be helpful in many situations.

Turns out she was cut out for it, and after finishing the class she became a paramedic. She’s worked at KDMC since then.

Her greatest joy as a paramedic is helping someone during their time of emergency. While not all emergencies are the same, Warren hopes to bring a sense of calmness and comfort to the situation.

“I helped that person, even though they weren’t gonna die,” Warren said of one particular call. “When you can do that for someone, it’s a joy.”

Part of being a paramedic is entering an unknown situation and keeping a cool head and knowing what protocol to take. This is one of the biggest things about working not only as a paramedic, but also in the medical field in general.

“I’m that person that can go in and stay calm,” Warren said.

One of her biggest struggles is one that nearly all paramedics face, the fact that not every situation has a positive outcome.

“You just don’t save everyone, that’s not reality,” Warren said. “It’s your losses, the people you can’t save or help.”

More specifically, Warren talked about not being able to help save a child during an emergency.

“It’s not all sunshine and roses,” Warren said.

The most important thing about being a paramedic to Warren is the fact that she can contribute to society while doing something she loves.

“Being able to help people and still be able to make a living is a great joy to me,” Warren said.