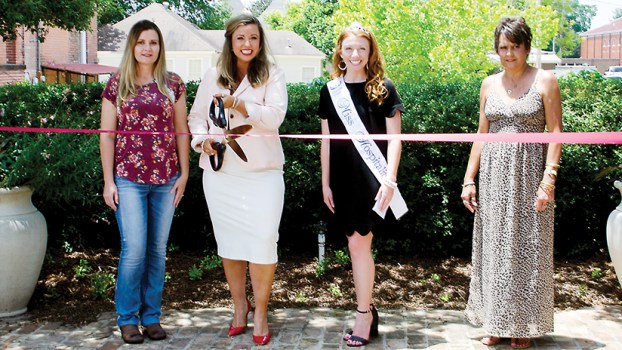 A cleaning company founded by a Monticello native has come to Brookhaven.

Southern Domestic Diva has made its way to Lincoln County. A ribbon cutting was held Thursday to celebrate Allie Williamson’s business breaking into the Brookhaven market and joining the Brookhaven-Lincoln County Chamber of Commerce.

“I personally love to see local entrepreneurs that have been successful elsewhere bring their business models back home,” Program Director Katie Nations said. “I know Allie personally and she is going to do a phenomenal job at anything she sets her mind to. We look forward to seeing her business grow in the Brookhaven-Lincoln-Lawrence County areas.”

Williamson, 34, graduated with a degree in hospitality from the University of Southern Mississippi in 2008. After college, she spent eight years in outside sales, having lived in South Carolina, Alabama and Hattiesburg.

She moved to Nashville to continue working in sales and started cleaning on the side. As a single woman living by herself, the extra income allowed her to experience what the city had to offer.

“It was my way to be able to go and hear live music,” Williamson said. “I used to say I cleaned for the tunes.”

After making the decision to start her own business, she began developing. For the first six months, she cleaned by herself, but it grew over time.

Six years later, Williamson now has 35 employees and over 400 clients.

“I wanted to create my own business,” Williamson said. “It just became a reality, and here I am six years later.”

Sothern Domestic Diva has two branches — one in Nashville and the other in Monticello.  The company offers services to three different types of buildings: residential, commercial and rental/vacation properties.

“Here in this market, commercial and residential are really big,” Williamson said.

Those interested in booking cleaning services can fill out a questionnaire online. Options are customizable, and payment can be made through their website.

Williamson is optimistic about her business and how it will fare post COVID-19.

“I feel like there will be a greater need for cleaning, that sanitation is now the new trend, and it will do nothing but help our business increase,” Williamson said. “That’s why we’re training the staff to handle the influx in business.”

Williamson said her employees are taking precautions during this time.

“We are taking the precautionary measures of having our divas in gloves, foot protectors masks and now we are partnered with Odo Ban disinfectant.”

The name for the business was handcrafted by Williamson herself.

“I truly am a southern diva from south Mississippi,” Williamson said. “My mom wouldn’t let me leave the house without red lipstick.”

The girl featured in the business’ logo is seen wearing a strand of pearls, and Williamson credits this to her time in Delta Delta Delta at USM, more commonly known as Tri Delta, where pearls are a symbol of the sorority.

As for the domestic part, Williamson credits that to being a southern girl.

“I had a friend tell me ‘You’re just a little domestic diva,’” Williamson said. “It’s been a hit.”

Her employees, nicknamed “divas,” drive around in small red cars to travel to where they need to clean.

One reason Williamson said her business is important to her because she is a female business owner.

While she’s focused on building her business, Williamson knows that everything isn’t all about her.

“It’s not just about meeting my own goals, but helping others too,” Williamson said.

She hopes her employees will be seen as more valuable in the post COVID-19 era.

“Post-COVID, I feel like sanitation workers are going to be viewed different, that they’ll be more respected,” Williamson said.

Williamson is eager to be a part of the business atmosphere in Brookhaven and hopes residents will be as well.

“I hope to be able to be a presence for Brookhaven and to serve as a consistent role in helping with the sanitation of the commercial buildings here,” Williamson said.