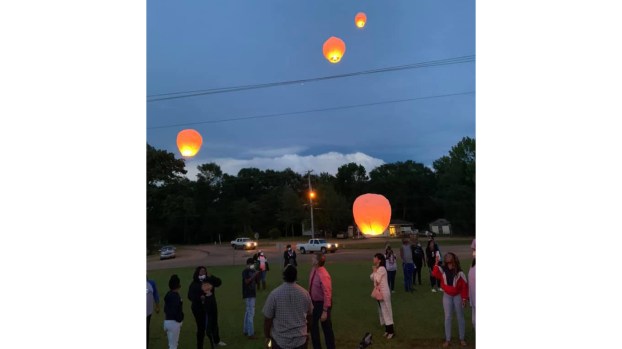 Photo by Brendon Adams / Balloons were released during a memorial at the Bogue Chitto 8 memorial sign in Bogue Chitto Wednesday evening.

Jurors reach out, resulting in night to remember

It was a surprise move, as far as juries go. Everyone involved agreed it’s pretty unheard of for a jury foreman to make some calls and end up sitting around the dinner table with victims’ families. Most citizens who do their duty and hand down four death penalties would rather forget about the whole thing. But in this case, they couldn’t. They just couldn’t forget.

And that’s why three months after the State of Mississippi v. Willie Cory Godbolt trial concluded, a bunch of jurors from Desoto County made the long trip down l-55 to Bogue Chitto. They wanted to mark the third anniversary of the state’s largest mass killing by spending time with witnesses they’d watched in the stand. They wanted to do something in memory of the victims.

And they were what you might call the pick of the crop, these jurors. Back in February, it took attorneys five days to select them from rows and rows of potentials. I remember the morning the process began. They were in Hernando, but I was standing on my Copiah County porch. The sky thundered. Rain fell in sheets. I couldn’t help but think that it was like two-and-a-half years of tears bottled up, coming down all at once. The families of Godbolt’s eight victims had waited a long time for justice.

But last Wednesday night, seated in folding chairs outside the Bogue Chitto fire station, the families and jurors didn’t talk much about justice. Instead, they talked about recovery and community support, and they did it while enjoying a buffet meal complete with pastalaya and peach cobbler. Event organizer Tate McCaffrey and his crew of volunteers made sure of that.

“When we heard the jurors were coming to town, we wanted to treat them as well as we could,” the longtime Bogue Chitto resident explained. Volunteer group BC Strong not only provided a meal for the jurors, but hotel rooms as well. “The jury members’ lives were changed forever by what they had to sit through and deal with, and that’s not often thought about.”

McCaffrey’s son, J.T., played his guitar and sang “I Can Only Imagine” for the crowd of some 100 attendees, including prosecutors and law enforcement officers involved with the case. Relatives of victims Jordan Blackwell and Austin Edwards also sang several songs, and Tressie Durr, widow of slain officer William Durr, closed out the evening by joining in a duet with McCaffrey.

Forewoman Nicole Becker addressed the crowd on behalf of the jurors, acknowledging she was astonished by the calm bravery of family members who gave testimony in court. “That helped settle me so I could focus on what we needed to focus on, and that was the task that we had been given — to follow the law. We all, every one of us, felt like God is so intentional. We just knew that we were supposed to be there.”

Juror Mildred Williams, a mother of six, told me she was able to serve because of her capable husband and his belief that jury duty is important. Standing beside Williams, Anna McDonald acknowledged it was an honor to be selected. Still, they were burdened by the weight of their task: “We prayed in the jury room, and we prayed before we left the hotel. We prayed before deliberations. We prayed over each other because when people would break down, everybody else was there to lift them up. We each had our breaking points.”

Shon Blackwell, father of victim Jordan Blackwell, told jurors he knew they had a difficult job. “We watched you during the trial, and we were so sorry you had to hurt, listening to what happened that night.”

Bailiff Charles Campbell has overseen several jury groups during his career, and he said this one really came together during their two weeks of sequestering. “A lot of times you get someone who doesn’t bond with the rest, but that wasn’t a problem. They did the job that they had to do.”

Becker explained that when jurors returned home after the trial, it seemed like they had entered a kind of “alternate universe.”

“We felt our work wasn’t done and that we’d left a piece of our heart behind. We kept wondering what we could do. How could we reach out?”

The approaching anniversary gave the jurors an idea. They’d seen other groups release Chinese lanterns to mark occasions. Why not suggest that to the victims’ families?

So at dusk last Wednesday, participants in Bogue Chitto moved from their tables to form a circle near the stone monument that lists the names of the eight victims of the 2017 shootings. Family members and jurors lit paper lanterns and watched them lift slowly into the night.

And because of their tie to the tragedy, jurors said they look forward to maintaining relationships with family members and the community. Tate McCaffrey plans to make the gathering an annual event.

How can anyone defend a heart full of prejudice?

This is an unusual moment for me. I don’t know what to say. I’m rarely at a loss for words.... read more