Health care hero: ‘We have your back’ 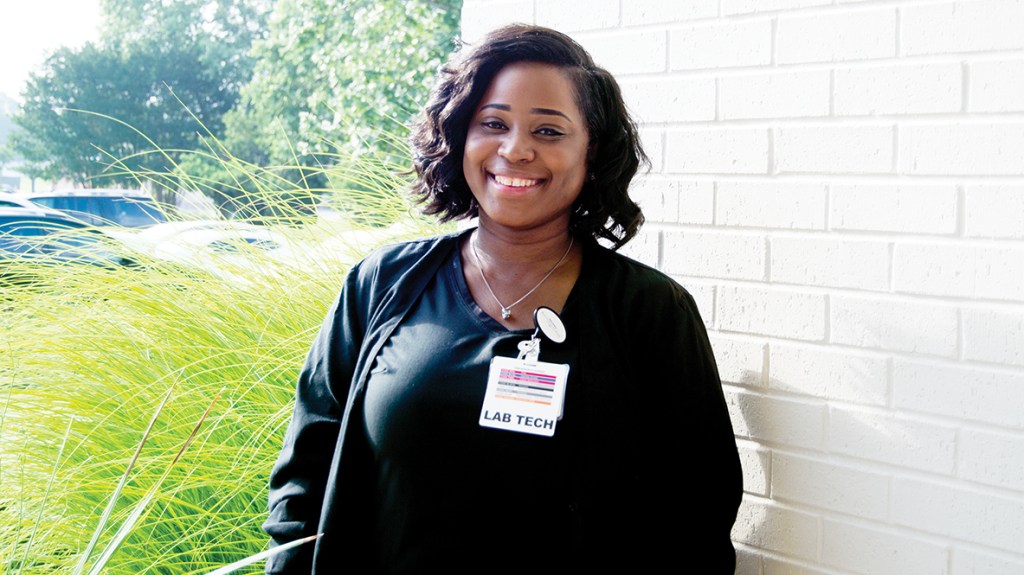 Photo by Gracie Byrne Arkelia Reed has been a phlebotomist in outpatient surgery for KDMC since 2017.

Phlebotomist Arkelia Reed strives to make her patients feel comfortable during their visits.

Reed has worked in outpatient surgery at King’s Daughters Medical Center for more than two years now. It’s been two years, six months and six days to be exact. For her, each day is special.

As a child, she observed the care her parents received during their doctor’s appointments and was inspired. With phlebotomy specifically, she found it fascinating how they took blood from their patients.

Reed entered the medical assistant program at Virginia College. She had already completed a phlebotomy class before enrolling, and so she chose the phlebotomist route of the program.

Reed isn’t one to shy away from blood. While many people faint at the sight of it, it’s all part of the job for her.

“I’m the opposite when it comes to that,” Reed said.

Reed described her job’s greatest joy to be when her patients smile. She often sees patients who are afraid to be in the hospital, and so she talks to them in order to ease their anxiety about their situation.

Her job’s greatest struggle is trying to be in two places at once.

“I can have a patient, but then a nurse might call and need me too,” Reed said. “There’s constant blood work needing to be done.”

Phlebotomists often act as the middleman between patients and doctors, with them taking blood and sending it to the lab to be tested.

One major part of her job that she enjoys is being able to take someone’s blood on the first attempt.

“That makes my day,” Reed said. “When a patient says they’ve been stuck so many times and I get them on the very first time.”

Working during the COVID-19 pandemic hasn’t been easy for Reed.

The extra precautions have been time consuming, but Reed doesn’t mind.

“I just have to make sure everything is wiped down,” Reed said. “There’s constant hand washing. It’s not only for my safety, but for my coworker’s safety as well.”

Reed wants others to know her job is important to her and that each patient matters.

“It’s all about our patients and making them feel as comfortable as they can,” Reed said. “We have your back.”