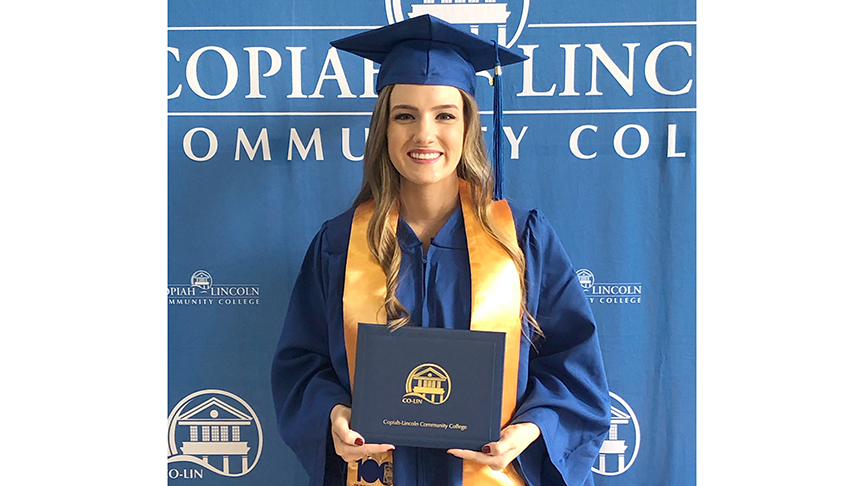 She is currently a junior at Mississippi State University, majoring in biological sciences and minoring in psychology. King anticipates graduating in May 2021.

King initially heard about the scholarship program at an Alpha Omega science club meeting at Co-Lin. While many students apply as a sophomore, she applied as a junior.

“The application process was pretty straightforward,” King said. “I reached out to some former instructors.”

The requirement for the scholarship is that recipients must work in an underserved community with a population of less than 20,000 for four years following graduation from medical school.

In order to receive the scholarship, King has to be accepted into medical school. She plans to apply to the University of Mississippi Medical Center this year.

“That’s the only place I’m applying this year and that’s where I hope to go,” King said.

Growing up, King had always wanted to be a veterinarian, and that was the career path she had planned on pursuing.

“As long as I can remember, that’s always what I wanted to be,” King said.

In high school, she became interested in dermatology after completing a class project relating to their future careers.

“That’s when I really started looking into medicine,” King said.

Being a doctor seems to run in her family, as King credits her great-grandfather, who was a general physician in Franklin County.

“He was a small town doctor,” King said.

King said the stories her mom told her about him inspired her in her own journey to work as a doctor.

“He was one of those people that anything was OK with him, even if you couldn’t pay him,” King said. “He didn’t do it for the money, he pursued medicine to give back.”

King hopes to convey those same feelings herself one day to her patients.

“Being a doctor isn’t just about medicine, it’s about learning and caring for people,” King said. “I care about people, and that’s what medicine is.”

Another role model for King is her mom, who works as a high school science teacher at West Lincoln. As a student, she took Biology 1 and Biology 2 under her mom.

“My mom is a really big role model in my life,” King said. “She was always the person that pushed me to do things, even if I didn’t want to do them.”

One goal King has for her career is to be able to give back to her community through sharing her knowledge.

“The biggest thing I hope to achieve in small town medicine is to be able to educate people,” King said.

King credits her mom for this hope not only from her role as her mother, but as her teacher as well. Because of this, King has worked as a tutor in several subjects.

“That’s something I’m really passionate about,” King said. “Taking material I know and breaking it down so anyone can understand. That’s something I hope to accomplish, to teach others how to take care about of their health and how to care about their bodies.”

Her goal is to become an OB-GYN and work in Brookhaven or a nearby community.

“I think that fits what I want to achieve in my life,” King said.