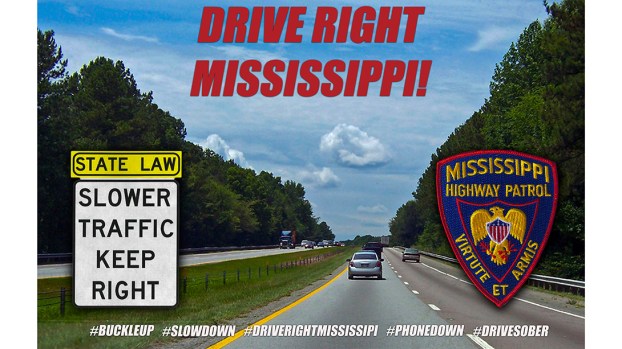 Starting Friday at 12:01 a.m. and ending Sunday at midnight, the state’s highway patrol issued 4378 citations with 116 DUI arrests. Nearly 140 crashes were investigated, including four fatalities and 43 injuries on state, federal highways and interstate systems across Mississippi.

As for Lincoln County, there were no fatalities recorded for the holiday weekend.

On Friday, Troop M responded to 84 road hazards and 50 non-hazards. There were 3 DUI arrests and one drug arrest. There were eight tickets given for not wearing a seatbelt and five for lack of child restraint.

Three collisions were recorded, with one of those being alcohol related.

On Saturday, Troop M responded to 66 road hazards and 42 non-hazards. There were two DUI arrests and six drug arrests. There were 19 tickets given for not wearing a seatbelt and one for lack of child restraint.

Two collisions were recorded, with one having injuries.

On Sunday, Troop M responded to 82 road hazards and 61 non-hazards. There were five tickets given for not wearing a seatbelt, with two for lack of child restraint. One motorist assist was recorded.

Four collisions were recorded, with two having injuries.

As the MHP “Drive Right Mississippi” safety initiative continues through the heavily traveled month of July, motorists are urged to be mindful of the Left Hand Lane Law, obey posted speed limits, avoid driver distractions and ensure everyone in the vehicle is properly restrained.

The Brookhaven-Lincoln County Chamber of Commerce named The Hideaway at Reed’s Estate as their June “Business of the Month.” Pictured... read more