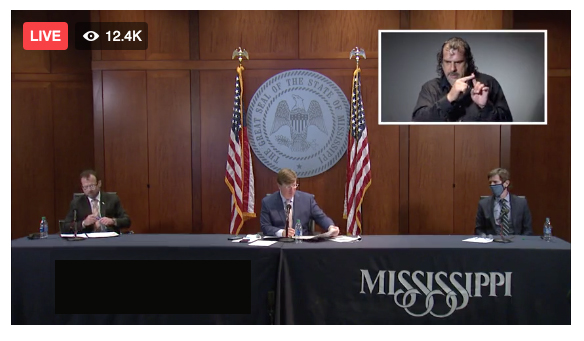 (AP) — Mississippi Gov. Tate Reeves said Tuesday that he’s setting a statewide order for people to wear masks in public amid a recent surge in cases of the new coronavirus. The Republican also delayed the start of the school year for upper grades in eight counties that are hard-hit by COVID-19.
Reeves also said he will sign an order mandating that all adults and students wear masks in schools, unless there’s a medical reason that prevents them from doing so.
He is delaying the start of school for grades 7-12 in eight counties with more than 200 cases and 500 cases per 100,000 residents. The counties are Bolivar, Coahoma, Forrest, George, Hinds, Panola, Sunflower and Washington.
“We must pump the breaks in the hardest hit areas,” Reeves said.
He had previously set a mask order in 38 of the 82 counties, saying he thinks a targeted order has been effective. As he announced the expansion of that mandate to the entire state, he said he’s aiming to slow the spread of the virus to decrease the stress on the health system.
“Wearing a mask — as irritating as it can be, and I promise you I hate it more than anyone watching today — is critical,” Reeves said.
Reeves said most local school districts will keep control over when and how to open schools for the academic year.
Schools are dealing with the reopening in different ways. Some have already gone back to classroom teaching in recent days. Some are planning a mix of in-person and online classes. A few districts have said they will only have online classes for a while. And some are delaying the start of the school year by a few weeks, until early September.
The Mississippi chapter of the American Academy of Pediatrics said in a statement that it wants school openings in the state to be delayed until at least September, to see if coronavirus caseloads are clearly declining by then.
Mississippi’s State Health Officer, Dr. Thomas Dobbs, issued a statewide order Tuesday requiring people who have tested positive for coronavirus to isolate at home for at least 14 days. Those who fail to comply could face six months to five years in prison and a fine between $500 and $5,000, according to the state health department.
The Health Department said Tuesday that Mississippi, which has a population of about 3 million, has had at least 62,199 reported cases and at least 1,753 deaths from COVID-19 as of Monday evening. That’s an increase of 1,074 confirmed cases and 42 deaths from numbers reported the day before.
The true number of virus infections is thought to be far higher because many people have not been tested and studies suggest people can be infected without feeling sick. For most people, the coronavirus causes mild or moderate symptoms. For some, especially older adults and those with existing health problems, it can cause more severe or fatal illness.

Tuesday afternoon, State Health Officer Dr. Thomas Dobbs issued a statewide order for the isolation of anyone diagnosed with a... read more