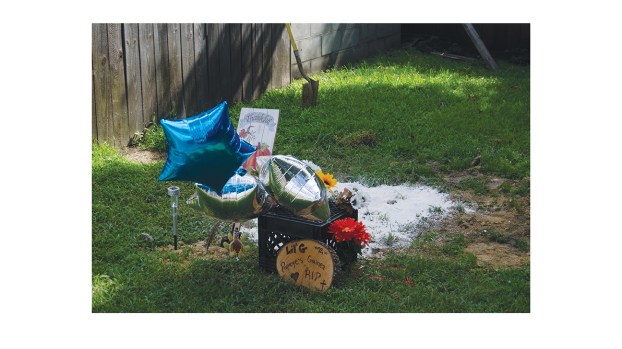 The Brookhaven icon and guineafowl “Lil G” was found dead Friday after a presumed accident.

Residents of Brookhaven were saddened by the news Friday that local guinea mascot Lil G was found hit by an unknown vehicle early Friday morning. For many, the guinea was a local celebrity, spotting him at his hangout spot between Dairy Queen and Popeyes on Brookway Boulevard.

A product of folklore, the legend behind Lil G was that he started out as a pet. After his owner brought him and other guineas to be sold at Walmart, he escaped and was unable to be caught.

He was known to be fast, playful and always on the hunt for food, both of the human and bird variety.

His owner has never been correctly identified, as multiple people have stated they were Lil G’s original owner before he escaped.

No one knows exactly how old the guinea was, but many residents say he was around 14 years old. The average life expectancy for a guinea is 10-15 years.

Adrianna Fuller, a manager at Dairy Queen, said their staff would miss the guinea. For them, he was a personality.

“He would just make you smile,” Fuller said. “He was so cute.”

Fuller and the other employees don’t know exactly what happened to Lil G, but they feel like it was an unfortunate accident.

“We think that morning he may have been sleeping and was caught off guard, we’re not completely sure but we know he was hit,” Fuller said.

Either way, it’s a somber occasion for anyone who works on Brookway Boulevard.

Audrey Scott, general manager at Popeyes, said he usually sat at the door in the morning.

“When we got here that morning, we saw feathers,” Scott said. “And then we found him.”

The accident had already happened by the time Popeyes staff arrived to open the restaurant.

“We don’t really know what happened,” Scott said. “It was so dark you really couldn’t see anything on the cameras.”

Scott said her staff was upset and wanted to know what happened.

“They called each other and let each other know,” Scott said. “He was like our little security guard. People from out of town loved him, and people here really cared about him.”

Dave Pace of Brookhaven Monument has stepped up and stated they will provide a small headstone for Lil G’s burial plot behind Dairy Queen. Many residents have already left flowers and other mementos celebrating the bird.

Debbie Adams Keene, who designed the popular “Brookhaven Guinea” shirt back in 2018, along with t-shirt processor Jennifer Calhoun, will be taking orders on the shirts.

Cases rise as students go back to school

COVID-19 cases rise as schools welcome back students across the state Lincoln County. For this area, there were 937 cases... read more