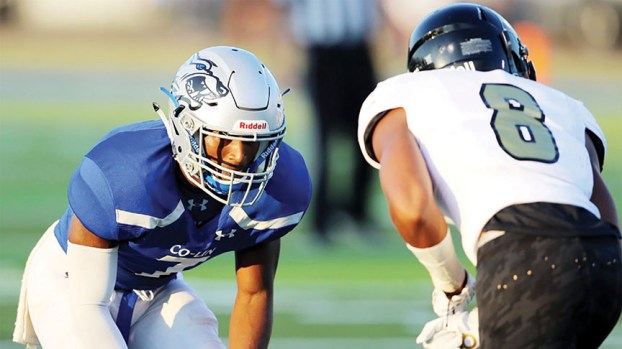 Photo by Co-Lin Sports Info Co-Lin defensive back Jemaurian Jones and the Wolves open their season on Oct. 1 at Southwest MS C.C. A Brookhaven High alum, Jones is a redshirt sophomore who spent his freshman season at Southern Miss. CLCC makes its home debut on Oct. 8 by hosting Pearl River.

The campaign will be year number 17 as the head Wolf for CLCC coach Glenn Davis. The conference played a 10-game regular season at one time before settling into a nine-game slate over the last several years.

In 2020 the season has been trimmed down to six games as teams will only play their division opponents due to the COVID-19 pandemic.

The first game for Co-Lin is against the last opponent faced by the team — the Southwest Mississippi Bears.

That game has a 7 p.m. kickoff scheduled in John I. Hurst Stadium in Summit on Oct. 1. The last time out for either team was the 2019 regular season finale — a 41-0 win by Co-Lin in Summit.

Fans who want to see the new video board that Co-Lin has recently installed won’t have many times to see it in action as there are only three home games on the shortened schedule.

This is the first year for CLCC to move homecoming to a Thursday night, a decision that most of the schools in the state have embraced.

On Oct. 15 the Wolves are back on the road, as they’ll visit the defending NJCAA national champs from Mississippi Gulf Coast C.C. The Bulldogs and coach Jack Wright beat Co-Lin 38-20 last season in Wesson on their way to a 12-0 record.

Kickoff in Perkinston is scheduled for 7 p.m.

Oct. 22 the Wolves host the Hinds Eagles in another rivalry matchup. Former Co-Lin assistant and current Hinds head coach Larry Williams took the Eagles to the state championship last season where they were beaten by MGCCC. Hinds also played in a bowl game in which they lost 34-19 to Iowa Western C.C.

Co-Lin stays at home the following week as they’ll play East Central on Oct. 29 in H.L. “Hook” Stone Stadium. Last season the Warriors from Decatur gutted out a tough 23-18 win in Wesson.

After a bye week on Nov. 5 the Wolves conclude the regular season a week later with a trip to Ellisville to face Jones College on Nov. 12. Jones also grabbed a close win in Wesson last season, outlasting the Wolves 21-14 at homecoming.

All regular season games for the Wolves will take place on Thursday this season, with home games beginning at 6:30 p.m.

Blayten Windom, 11, of Bogue Chitto killed his first alligator in the Mississippi River. The alligator was killed on Aug.... read more