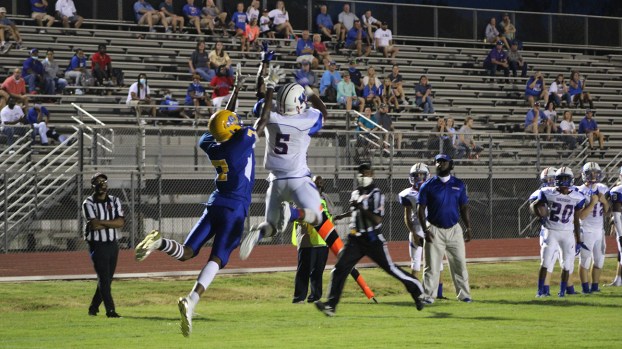 The Wesson Attendance Center Cobras passed and ran all over the Natchez High School Bulldogs in a 34-20 victory on Friday night.

The game was called at halftime due to several lightning delays in the area.

Natchez High’s Kyreek Murray threw the ball great for the Bulldogs with two touchdown passes. Murray’s longest pass was to running back Traylon Minor for 85 yards.

Murray connected with Mike Williams for a 55-yard touchdown in the second quarter with seven seconds remaining. The Bulldogs scored a two-point conversion and made the game 34-20.

“Both Minor and Williams had great passes from Murray in the game,” said Randy Craft, Natchez head coach. “I’m really proud of Murray’s progress as far as good reads and accurate throws.”

Natchez High’s Liondell Minor also a good game as he ran a kickoff for 70 yards for the Bulldogs second touchdown in the game.

“He had an explosive play and we know he can make it happen, when he puts his mind to it,” Craft said. “I hope we get the same thing out of him next week.”

The Cobras were led by Will Loy on offense. Loy threw for two touchdowns in the game with the longest being for 70 yards to Antrelle Sims. Loy and Sims connected for the first time for 13 yards in the first quarter.

The Cobras’ running game was also successful in the win on Friday. Collin McGowan, Jason Edwards and Chris Davis each ran for a touchdown in the game. Davis had the longest rushing touchdown for 15 yards.

“I think we did fine on offense and the players did what I expected them to do,” said Jeremy Loy, Wesson head coach. “They are good ball players and they have been with me since the eighth grade. To have only two penalties in the first game of the season and score 34 points at halftime was pretty good.”

The Bulldogs could only stop the Cobras’ offense twice and the other time was in the red zone.

Craft said he is going to focus on executing more on offense in practices next week.

BC knocked off in season opener by Resurrection