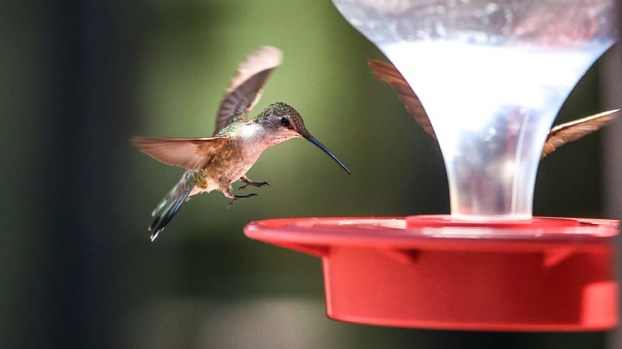 File photo A hummingbird eats at a nectar feeder.

We had one humdinger of a Labor Day

On Labor Day we did as all good Americans do. We labored over household to-do lists. Mine including revamping the laundry room and painting a pair of nightstands, while my husband’s was a bit more involved. He had to down a huge lightning-struck white oak that threatened my tranquility any time a storm brewed up.

It all happened because I somehow found time to grill burgers in between the laundry room overhaul and paste wax application stage of the furniture update. So we ended up with nine around the table and a freezer of homemade ice cream to enjoy. (Can’t be all labor on Labor Day, right?) Afterwards, those of us without chainsaw skills decided to watch the demise of the white oak from under the pergola.

The first thing you need to know is that ours is no ordinary pergola. It’s covered with wisteria vines, and anybody who’s ever grown wisteria knows this plant that has a mind of its own. It took a few years to get going, but once it did, wow. Twisting. Dangling. Climbing. Thick. My husband, the vine trimmer, isn’t so crazy about it, but I really like our mass of wisteria, with its canopy of shade and Pinterest-worthy backdrops. But guess who loves it? I mean really loves it? Birds, that’s who.

That’s why we have this aviary vibe going on right out our backdoor. Scores of feathered friends swoop in and hang out on the vines, on the strands of lights, even the window ledges. For some reason, hummingbirds get a special invite. Not just one, but two containers of the red stuff beckon them to an all-you-can-eat buffet anytime they like. And you better believe they like.

So we were out there dividing our time between watching the bird show and the lumberjacks when I noticed the feeders were empty. Well, nearly empty. I hated to think of those hummingbirds risking all to come within a yard of us for nothing. I mean, the level was below those little yellow petal thingies. It was crunch time as far as bird feeders go.

But I’ve watched my husband prepare the liquid blend that goes into them. It’s the only occasion I’ve ever seen him use a stove. It’s laborious business, this hummingbird food stuff, with its mixing charts and cooling times. I really didn’t want to learn how to do it. No, I didn’t, so I decided to just add a little water to what was left in the feeder. Turned out kind of pink. I felt very efficient.

An hour later we all were back in the air conditioning hailing the men for their triumphant tree cutting when my husband looked through a window and noticed the hummingbird feeder. He could tell.  Suddenly, I no longer felt efficient.

“It’s a science,” he said, bemoaning my compromised concoction. “They will never come back. Never. The word will get out.”

What? Hummingbirds are going to tweet that I’m diluting the formula?

Peggy’s? So now our hummingbirds are defecting to Peggy’s? Peggy, you see, allows Son No. 2 and his family to swim in her pool where nearby there are hummingbird gatherings of ginormous proportions. Peggy, evidently, never dilutes their food. She does the stove thing and the whole kit and kaboodle. Well, good for her.

So this Labor Day I learned a lesson. Stick to my own to-do list. From now on, just leave the feeder alone.

And enjoy the show.

Therefore, encourage one another with these words

I like sad songs. Maybe it’s because they “say so much,” as Elton John sang. Or maybe it’s just because... read more