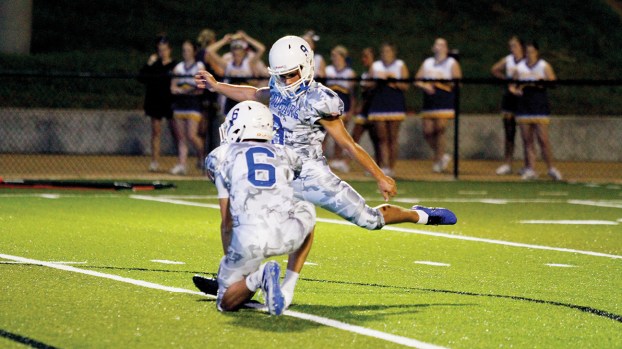 Brookhaven Academy had a hot start in Stone Stadium on the campus of Copiah-Lincoln Community College Friday night as the Cougars piled up 53 points while holding the Centreville Tigers to just six.

“We’ve been playing well offensively all year; we are just getting better every week. Coach (Jaymie) Palmer also had a great offensive game plan,” said BA head coach Ron Rushing. “We saw some things on film we thought we could take advantage of, but it is just coming out and executing the game plan.”

After a quick Centreville three-and-out, the Cougars’ first drive stalled, but it was no problem as Corey Case drilled a 43-yard field goal for the first score of the night.

Another defensive stand got BA the ball again. The Cougars went on a six-play, 85-yard drive for the first touchdown of the contest.

Quarterback Tyler Fortenberry shined on the long drive as he connected with senior receiver Rob Johnson for a 43-yard strike.

After a lengthy run from Gavin Brogden, Fortenberry called his own number and punched it from one-yard out. The ensuing PAT put the Cougars up 10-0.

Brookhaven continued to pour it on the Tigers as Centreville fumbled the snap on the second play from scrimmage. Trevor Fortenberry quickly jumped on the loose ball in the end zone for the score. The Cougars added a two-point conversion on a fake kick from Case to grow the lead to 18-0.

Centreville had one shining moment in the first quarter as Caleb Kinabrew hit a streaking Nicholas Parrish for a 65-yard toss and catch touchdown. The two-point conversion failed, making it 18-6 Brookhaven Academy with 3:03 remaining in the first.

The Tiger momentum was brief as the Cougars once again flexed their muscles with a four-play 65-yard drive to negate the score. The Tyler Fortenberry to Dylan Fortenberry score from eight yards out and a Case kick put BA back on top, 25-6.

The big plays continued to pile up for the Cougars in the second quarter as Tyler Fortenberry utilized his speed on a 71-yard touchdown dash.

He later hit Collin Waldrop for a 30-yard score. BA closed out the half with a touchdown pass to Trevor Fortenberry from 10-yards out. The scoring onslaught led to a running clock as the Cougars took a 46-6 lead into the locker room.

The second half was much of the same for the Cougars despite Rushing pumping the breaks on the high-flying offense. Senior Luke Johnston posted several big runs, including a score.

Tyler Fortenberry led the Cougars offensively with 220 passing yards on 11-of-17 passes with three scores. The junior also racked up 90 rushing yards on five carries with two touchdowns. Johnston finished the night with 13 carries and 91 yards along with his score.

Trey Fortenberry was the leading receiver in yardage with 64 on three catches, while Trevor and Dylan Fortenberry along with Waldrop caught one score each. Waldrop also led BA defensively with four tackles.

“We were great defensively,” said Rushing. “That was our emphasis going into the summer and into this season, we knew we would pretty good offensively, but we had to improve on defense, and with exception of that one play, we played great.”

BA is on the road next week as the team travels to Natchez to face Cathedral School in their district opener.

“We are 0-0 going into the district, there are some great teams in our district with us, Cathedral and Riverfield …this being our first district game, we hope to get off to a great start and go in and play well,” said Rushing. “Natchez is a tough place to go into and play so we need a good week of practice and play as cleanly as we did tonight.”

Jefferson Davis grinds out win over the Lawrence County Cougars

The Lawrence County Cougars jumped out to an early lead over the defending 3A state champion Jefferson Davis County Jaguars... read more