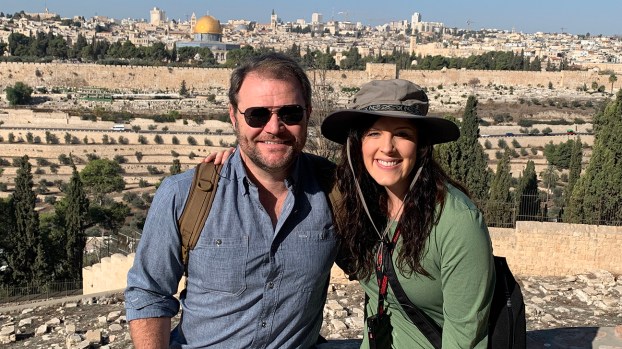 Photo submitted The Rev. Dustin George and his wife Rebecca are shown in a visit to Jerusalem last November.

Easthaven pastor: ‘God had other plans’

Dustin George sensed a call to ministry during his college years, but he didn’t know where it would lead, so he took opportunities that came along as he studied and taught Latin and English.

The path led him to become pastor of Easthaven Baptist Church, 130 Highway 84 East, in Brookhaven.

He worked on the ministerial staff of Sevier Heights Baptist Church in Knoxville, Tennessee, for 10 years before he came to Brookhaven.

George said answering the call to ministry “wasn’t a struggle. It was sort of a graduated process … God made the specific direction clearer over time.

“Over the years, I have been placed in many different ministry settings. Looking back, I can see God’s hand in giving those opportunities as preparation to serve as a lead pastor.”

George taught at Christian and college-prep schools in Mississippi and Tennessee.

Since then, he’s worked in every church leadership role except worship ministry.

Easthaven’s lead pastor, a friend from Tennessee, asked George to become his executive pastor and Sunday School director. After five years, the pastor moved to a different church and George was named Easthaven’s interim and then its lead pastor.

“I was planning on going back to Tennessee, but God had other plans,” he said.

George describes his congregation as kind and welcoming.

“When visitors come in, we make a whole-hearted effort to connect with them,” he said. “If someone remains a stranger, that is completely by their choice.”

He said he loves the members’ “deep love and pursuit of truth and their willingness to adapt to an ever-changing culture in order to make Christ known.”

George, who grew up just north of Meridian, lived in east Tennessee nearly 20 years. His wife Rebecca grew up in Kingsport, Tennessee. She works remotely for Hueman Recruiting and hosts the “Do The Thing Movement” podcast and founded the 818 Ministries (www.dothethingmovement.com).

The Georges live in Brookhaven with Jasper, their “wonder dog.”

As an English major, George taught English and Latin at Christian and college-prep schools in Mississippi and Tennessee.

He is studying to complete a degree from Southern Seminary.

“Now to him who is able to do far more abundantly than all that we ask or think, according to the power at work within us, to him be glory in the church and in Christ Jesus throughout all generations, forever and ever. Amen.”

George said the passage reminds him that his life and ministry don’t rest ultimately on him (his strength, abilities, understanding and declarations), but on God’s power, sovereignty, wisdom and plan.

Life is worth living, and suicide is preventable

A North Mississippi Army veteran ended his life violently in a video streamed live on the internet on the last... read more