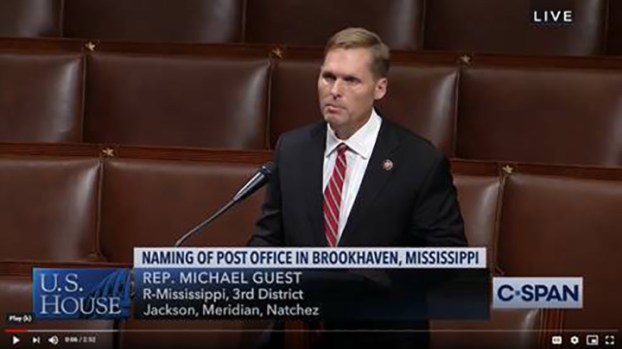 A bill to rename the post office in downtown Brookhaven passed the U.S. House of Representatives Monday.

The bill, HR 2246, passed the House and moved to the Senate Tuesday, where it was referred to the Committee on Homeland Security and Governmental Affairs.

“These three men lost their lives in the line of duty and, with the passage of this legislation, we will ensure that their sacrifice is not forgotten,” Guest said in a speech on the floor of the House of Representatives honoring the memory of the three fallen officers.

Lincoln County Deputy Durr was killed while responding to a domestic dispute in May 2017. A veteran law enforcement officer, he previously served with the Brookhaven Police Department.

Brookhaven Police Officer James Kevin White and Cpl. Walter Zachery Marshall Moak lost their lives in a stand-off in September 2018. Moak served with the Lincoln County Sheriff’s Department before serving with the Wesson and Brookhaven police departments.  In addition to serving as a police officer, White served in Iraq with the Mississippi National Guard where he sustained a serious injury.

The text of the floor speech can be found below:

I rise today in support of H.R. 2246, a bill to rename the United States Postal Service facility at 201 West Cherokee Street in Brookhaven, Mississippi, as the “Deputy Donald William Durr, Corporal Zach Moak, and Patrolman James White Memorial Post Office Building.” These three men lost their lives in the line of duty and, with the passage of this legislation, we will ensure that their sacrifice is not forgotten.

Donald William Durr, aged 36, died in the line of duty May 27, 2017. William was a deputy with the Lincoln County Sheriff’s Department, where he had been employed for two years after serving as a police officer with the Brookhaven Police Department for four years. William is survived by his wife, one son, his mother, and his sister.

James White, aged 35, died in the line of duty September 29, 2018, by gunfire. James was employed with the Brookhaven Police Department for three months and was previously employed with the Lawrence County Sheriff’s Department, where he worked many years. He was a soldier in the Army National Guard and served his country in Operation Iraqi Freedom. James was also a Purple Heart recipient and was the father of two.

Zack Moak, aged 31, died in the line of duty September 29, 2018, by gunfire. Zach was employed with Brookhaven Police Department for three years. He previously worked for Wesson and the Lincoln County Sheriff’s Department. Zach enjoyed spending his time working, helping people in his community, and in the company of his family.

President Ronald Reagan once said, “There can be no more noble vocation than the protection of one’s fellow citizens… No single group is more fully committed to the well-being of their fellow Americans and to the faithful discharge of duty than law enforcement.” Law enforcement, we know, lives by creed. That creed is to serve and protect. [Guest continued, borrowing from President Reagan] In the performance of their duty, danger is a routine part of their job,” and we, on occasion, lose some valiant men and women.

Because of the sacrifice of these three officers, we want to make sure that their valiant deeds will never be forgotten.

I hope you will join me in supporting this legislation to dedicate this post office in the memory of three heroes who gave their lives in honorable service to their community.