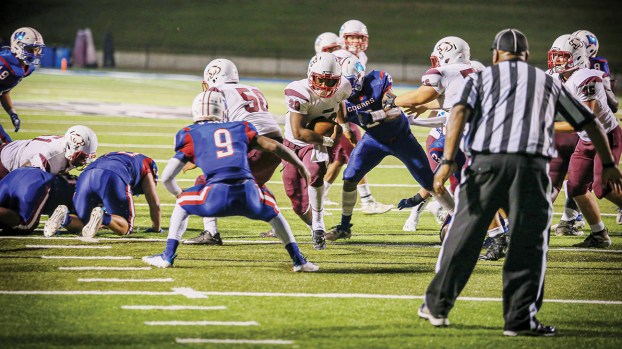 Photo by Lucas Calvert Lawrence County senior running back Tae Cole hammers through the Wesson defensive line for his third touchdown of the game Friday night.

Lawrence County’s rushing attack was just too much on Friday night as the Cougars escaped H.L. Stone Stadium, on Co-Lin’s campus, with a 35-27 win against the Wesson Cobras. The win moves the Cougars to 1-2 on the year and drops Wesson to 2-2. The Cougars rallied in the second half as they erased a 20-0 deficit to claim the win.

“It wasn’t anything that I did at halftime,” said Lawrence County head coach Jesse Anderson. “Our kids took it upon themselves, and said that we are going to play better in the second half and play Cougar football, and that’s what they did.”

Much like last week, the Cobras leaped out in front with impressive offensive play in the opening 24 minutes. Late in the first, Wesson’s quarterback Will Loy hit Jason Edwards for a 51-yard score for the first touchdown of the night.

Early in the second, the Cobras utilized the big play once again as Loy nailed a streaking Antrelle Sims for a 69-yard touchdown. The missed extra point put Wesson up, 13-0.

A Cougar three-and-out put the ball back in Wesson’s hands and a big run from Orlando Smith put the Cobras inside the five-yard line. Loy threw a dart to Cody Munn to grow the lead to 20-0, a score that the teams took to the locker room.

The Cougars took advantage of a Wesson fumble early in the third quarter, and quickly put together a four-play, 43-yard drive that was finished off with a 32-yard touchdown run from Lawrence County’s Tae Cole. The extra point cut the lead to 13.

A big defensive stand gave the ball right back to the Cougars and the rushing attack was back in full force. Five runs later, Jaheim Ball took it 33-yards to pull the Cougars within six points, 20-14.

The Cougars’ defense flexed their muscles again and quickly got the ball back in their offenses’ hands. On the first play from scrimmage, Cole broke out a 70-yard touchdown run which put Lawrence County on top, 21-20.

Wesson refused to tap out as Sims returned the ensuing kickoff 85-yards for a score that got the 25 percent capacity crowd at Stone Stadium back on their feet. The huge score regained the lead for Wesson, 27-21.

The Cougars continued to pound the running game on the next possession as Cole punched another run in and gave Lawrence County the lead, 28-27, the last lead change of the night. An insurance touchdown late in the game grew the lead to 35-27.

“I want to commend our defense tonight, they were playing hard in the first half, but were overrunning some things and didn’t have good eye discipline,” said Anderson. “They read their keys and trusted each other, and started doing their own jobs in the second half, and you can see how successful we were once we started doing that.”

Both squads are back at home next week for homecoming matchups as the Wesson Cobras play host to the West Lincoln Bears and Lawrence County faces Raymond.

When asked about next week’s matchup against Raymond Anderson said, “I don’t know much about momentum…we take things one day at a time, we concentrate on getting ourselves better each week, so right now the only thing we are looking forward to is Monday’s practice.”