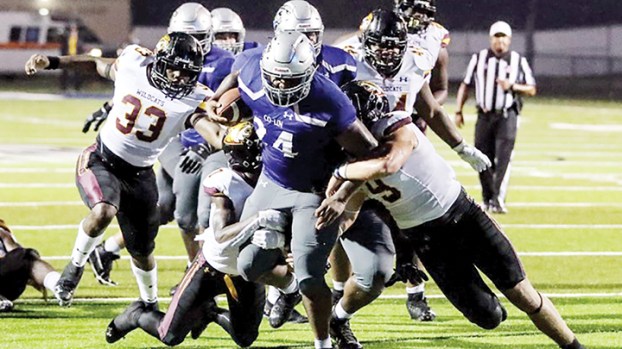 The Copiah-Lincoln Community College Wolves moved to 2-0 on the season by taking advantage of six Pearl River C.C. turnovers Thursday night in Wesson.

In a game played through a driving rain, the Wolves made less mistakes than their opponents to hold them off for a 27-24 win on homecoming night for Co-Lin.

The foul weather forced the presentation of the homecoming court to be moved to Rea Auditorium prior to kickoff.

CLCC sophomore kicker Bryce Lofton (Pisgah HS) is the reigning state special teams’ player of the week and he kept up his hot start to the season by making a 30-yard field goal just before halftime and a 42-yarder in the fourth quarter that gave Co-Lin a 27-17 lead late.

The Wolves got on the board after a 12-yard TD run by sophomore Drexlan Allen (Hattiesburg HS) in the first quarter.

Co-Lin led 10-7 at halftime behind that score and the first Lofton field goal.

PRCC tied the game early in the third quarter and then went up 17-10 when linebacker Noah Mitchell returned an interception that 37 yards for a score.

Co-Lin head coach Glenn Davis saw his team go to the air in order to tie the game back up as sophomore quarterback Paul Hargrave (Natchez HS) found receiver Tyquan Henderson (Canton HS) for a score.

That pair hooked up for two scores last week in a blowout win over Southwest Mississippi in the season opener.

The Wolves took their final lead when Hargrave scored from the 1-yard line. A long catch and throw from him to freshman receiver Dontavious Turner (South Pike HS) set up the touchdown.

The last Lofton field goal would end up being a crucial score as the Wildcats plugged away to pull within three after a drive that covered 91 yards.

With 3:41 remaining in the game Co-Lin was able to recover the PRCC onside kick and pick up the needed first downs to run out the clock.

Co-Lin only turned the ball over once on the night but had several mishandled snaps that moved them in thew wrong direction.

Hargrave finished 9-of-18 passing for 171 yards and also ran seven times for 44 yards.

Gray not only grabbed an interception but also forced a fumble and made 13 tackles for the Wolves. Linebackers Xavier Curry (Meridian HS) and Hayden Hill (Northwest Rankin HS) finished with 11 and 10 tackles each respectively.

Co-Lin (2-0, 2-0) is on the road next week at Mississippi Gulf Coast C.C. in Perkinston. The Bulldogs are the defending NJCAA national champions and have an 18-game winning streak to their credit.