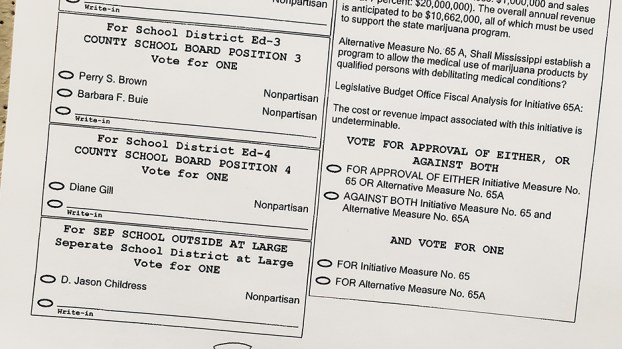 Photo by Brett Campbell This portion of a sample ballot for Nov. 3 shows the voting options for Initiative 65 and 65A.

You asked: Medical marijuana — what are the options?

A: There are major differences when it comes to the two initiatives Mississippians will be voting on in November.

The main difference is who controls the provisions for the initiatives. Under Initiative 65, the state’s doctors would set provisions. Doctors could recommend medical marijuana for patients suffering from at least one of the 22 specified qualifying conditions.

With Initiative 65A, these provisions would be set by the Legislature. The initiative would also limit who would be allowed to have a prescription for medical marijuana to terminally ill patients.

One thing the initiatives have in common is that they will both amend Mississippi’s Constitution in order to provide the establishment of a medical marijuana program.

“Initiative Measure No. 65, Should Mississippi allow qualified patients with debilitating medical conditions, as certified by Mississippi licensed physicians, to use medical marijuana?”

“Alternative Measure No. 65 A, Shall Mississippi establish a program to allow the medical use of marijuana products by qualified persons with debilitating medical conditions?”

According to Lincoln County Circuit Clerk Dustin Barfield, both sections of the ballot will be counted when it concerns initiatives 65 and 65A.

The top half is a choice between the following:

“They’ll count the top half first,” Barfield said. “But you still fill out the second half. If 65 passes, then if you voted against it, the vote on the second half will be counted statewide.”

The second half specifies “VOTE FOR ONE” of the following:

• FOR Initiative Measure No. 65

• FOR Alternative Measure No. 65A

To put it simply, if voters choose to vote against both initiatives, they will still need to fill out the bottom half of the ballot in the case of the overall vote of the state is to adopt an initiative.

For more information, go to www.dustinbarfield.com to find a sample ballot for the Nov. 3 election.

Thirty-three positive cases of COVID-19 have been added to Lincoln County’s case total since Friday, bringing that number to 1,355.... read more