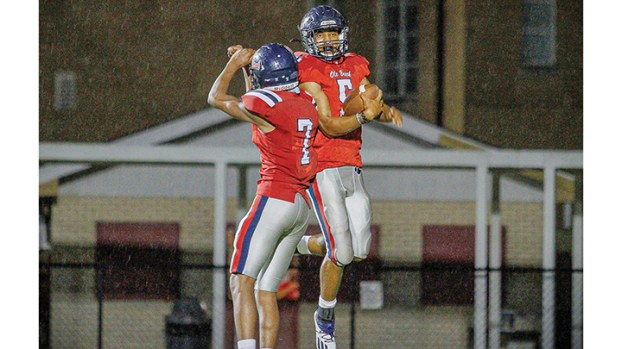 Scoring was hard to come by on a rainy homecoming night at King Field for Brookhaven as the Laurel Golden Tornadoes and the Panthers squared off for a divisional matchup. Laurel came out on top, 34-12, and dropped the Panthers to 1-2 on the year while improving the Tornadoes to 4-3. Brookhaven is on the road next week as the team travels to Natchez to face the Bulldogs.

“Offensively we just blundered the ball around too much,” said Brookhaven head coach Tucker Peavey. “I thought we played well on defense, except for when they just wore us down at the end — just too many mistakes on offense handling the ball.”

There was not much scoring in the first half, as both teams struggled hanging on to the ball in the wet weather. Late in the first quarter, the Golden Tornadoes capitalized on a Panther fumble and had a short field as they recovered on Brookhaven’s 17-yard line. Just a few plays later, Xavier Evans punched it in for the first score of the night. The point-after attempt failed on a bad snap.

The second quarter saw much of the same woes as the Panthers failed to establish a consistent offensive presence. Going into the locker room, Laurel led by six, 6-0.

Brookhaven got some momentum back as Toney Bussey snagged a pick from Dexter Scott early in the second half. The senior took it 50-yards to set the Panthers up at the Tornado’s 30-yard line. Just three plays later, Xavier Gayten took it to the house from 25-yards out. The extra point failed, knotting the game at 6-6 with 8:59 remaining in the third quarter.

Laurel quickly responded, and set the tone for the remainder of the night, on the ensuing with a quick 55-yard drive that showcased their rushing attack. Evans closed out the quick-scoring drive from about six-yards out. Evans also punched in the two-point conversion to go up 14-6 with 5:43 remaining in the third.

After a couple of Brookhaven turnovers, the Tornadoes led 22-6, but the Panthers still showed fight as Gayten shined on a 72-yard drive with numerous big runs. The talented freshman finished the drive from a couple of yards out, but the two-point try was unsuccessful, making it 22-12, with just 8:52 remaining in the game.

In the fourth, the Tornadoes ate the clock down with hard-nosed running, and scored a pair of insurance touchdowns in the process, on their way to the 34-12 victory.

“With a young team like we have, this game was very important,” said Peavey. “It’s good to get that game stress that we had tonight, and if we learn from this it can be a positive…it’s hard to simulate a true game in practice, so we hope we learned and respond well.”