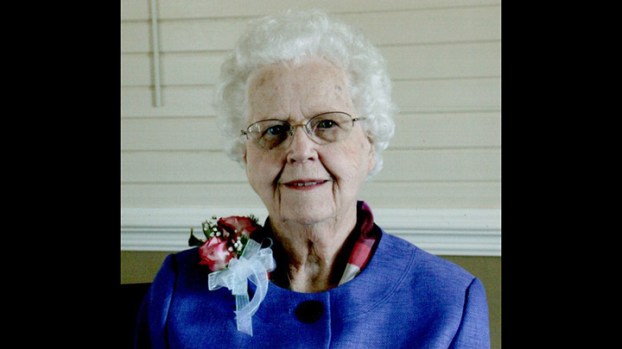 On October 26, 2020, our sweet Mother, Mary Burris Johnston Gill, entered the gates of Heaven. She has a new body and is resting in the arms of Jesus.

Visitation will be at Hartman-Jones Funeral Home, 1801 Delaware Ave., McComb, from 5 to 8 p.m. Thursday and continue Friday, from 10 a.m. until the funeral service there at 11 a.m. with Dr. Larry LeBlanc and Bro. Phillip Alford officiating. Burial will be at Concord Baptist Church Cemetery, 7175 Bogue Chitto Road, McCall Creek, immediately following the service.

Mary, 99 years of age, of Summit, Mississippi, was born in Amite County on September 26, 1921, to Eddie and Lula Burris of the Mars Hill community. She attended Mars Hill School, Southwest Junior College, and State Teachers College, now the University of Southern Mississippi.

In 1942, she married Winfred Allen Johnston in Connecticut where he served the United States Army Air Corp, now the US Air Force, and later resided in Farmingdale, New York. Upon his separation from the military, they purchased a country store in the Auburn community in Lincoln County. Upon his untimely death in 1949, Mary continued to operate the country store raising their two children, Mary Anne and Ken.

In 1957 Mary married Clyde Woodroe Gill and they moved to Bude where two more children, Martha and Lee, were born. Mary and Clyde lived in Bude until moving to Summit in 2004.

Mary worked as a clerk with the U.S. Postal Service for over 20 years serving in Eddiceton, Roxie, and Meadville before retiring from the Bude Post Office.

Mary and Clyde enjoyed growing fruits, vegetables and flowers, especially gladiolus, chrysanthemums, and camellias, in their gardens; sharing with friends and neighbors. Mary was also a seamstress making many clothes for her children over the years and was an avid reader and enjoyed solving word puzzles.

She is also survived by her passionate, loving family of caregivers, Maxine Monley, Debra Collins, Gloria Sparkman, Mary Sparkman, Chameka Sparkman,Sharon Matthews, Denise Nelson, Janie Sparkman and many others who are too numerous to name. Special thanks goes to Kala Adams of St. Luke Home Health and Hospice and their other sweet nurses who lovingly cared for our Mother.

Memorials may be made to The Baptist Children’s Village, 114 Marketridge Drive, Ridgeland, MS 39157, a place that was near and dear to our Mother’s heart, or any charity of your choice.