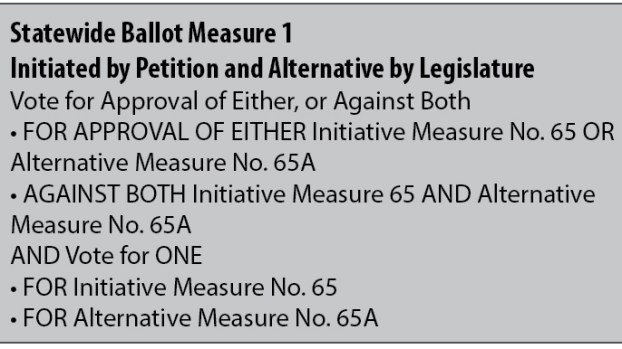 On Nov. 3, Mississippi voters will be asked whether they want to legalize the use of medical marijuana in the state.

But the ballot question is not that simple.

Let’s break it down.

Voters will be asked two questions as part of Ballot Measure 1 on the ballot. The first question is whether they want to approve Initiative 65 or 65A or whether they are against both.

Even voters who vote against both measures in the first question may cast a ballot for either 65 or 65A.

More than 228,000 Mississippians signed a petition, known as Initiative 65, which if approved would allow the use of marijuana as a medical treatment.

On the ballot, Initiative 65 reads, “Should Mississippi allow qualified patients with debilitating medical conditions, as certified by Mississippi licensed physicians, to use medical marijuana?”

If approved, Initiative 65 would become a part of the Mississippi Constitution. The group of citizens took the petition route because the Mississippi legislature has failed to act on the use of medical marijuana. The petition to alter the state constitution to include medical marijuana was citizens’ only alternative, said Jamie Grantham, communications director for Medical Marijuana 2020.

Mississippi lawmakers, saying Initiative 65 opens the door to the legalization of marijuana in the state, put forth their own ballot question, known as Initiative 65A.

On the ballot, Initiative 65A reads, “Shall Mississippi establish a program to allow the medical use of marijuana products by qualified persons with debilitating medical conditions?”

Proponents of Initiative 65 say the lawmakers’ 65A was put forth simply to prevent the passage of 65 and side step the issue of medical marijuana.

“This initiative really goes back to the history of medical marijuana in Mississippi,” Grantham said. “The Mississippi Legislature has never passed a medical marijuana program. Instead, they have blocked every single bill — more than 20 of them. None of them has ever made it to the floor for a vote.”

Jackson native Ashley Durval has a daughter, Harper Grace, who has suffered from seizures since six months old. In 2014, Durval petitioned the Legislature to pass Harper Grace’s law, which allowed the University of Mississippi Medical Center to study the use of CBD, a compound found in cannabis.

“It took five years to get a pilot program up and running, and only a handful of patients were selected, and Harper Grace was not one of them,” Grantham said. “She was not having enough seizures at the time, they said. Harper Grace’s mother is who filed Initiative 65 in 2018.”

Mississippi has an initiative option as a relief for citizens when the legislature does not act, she said.

“We would have loved for the Legislature to pass something, but they made it clear they are not going to do that,” Grantham said. “Thankfully Mississippi has this initiative option so citizens can address issues when the Legislature will not.”

“The Legislature is allowed to put up a competing ballot proposal. Right after Initiative 65 qualified in January, very quickly they filed 65A. It has no list of qualifying medical conditions.

“It has no program start date. Initiative 65A, if approved, would give the Legislature the option to create a state-run program, but they have no obligation to do so.”

Initiative 65 lists 22 debilitating diseases or illnesses as those that would qualify for medical marijuana use under the direction of a licensed physician in the state, including cancer, epilepsy, Parkinson’s disease, post traumatic stress syndrome, ALS and more.

“Thirty-four other states have a medical marijuana program,” Grantham said. “It leads to a better quality of life for those with debilitating diseases and for some, it is literally life saving.”

“I would not tell my constituents how to vote on an issue or on a candidate,” Mims said. “The voters in Southwest Mississippi will be very educated on all of the ballot initiatives. That said, I am not in favor of Initiative 65.”

Mims said discussions on the use of marijuana for medical issues are serious, and those discussions need to continue.

“I think Initiative 65A will direct the department of health to create a program and will have regulations on this important issue. I think that is the better way to go,” he said. “There is no difference between medical marijuana and recreational marijuana. Marijuana is still illegal. So it’s an important issue that needs further discussion and 65A will allow that.”

He said if 65A is approved, the Legislature could direct the Mississippi Department of Health to decide where in community businesses who sell medical marijuana can locate, or how many can set up shop in a community.

“Initiative 65 does not do that. Anyone could set up shop anywhere,” Mims said.

Adding the medical marijuana issue to the state’s constitution also concerns him.

“When you start amending a constitution, you have to be very hesitant, whether it is the U.S. Constitution or the state constitution. Once the constitution is amended, it is very difficult to change that. I don’t think a program like this should be in our constitution,” he said.

Brookhaven Country Club and Brookhill on Natchez will merge into one entity as of Nov. 1. The Clubs at Ole... read more