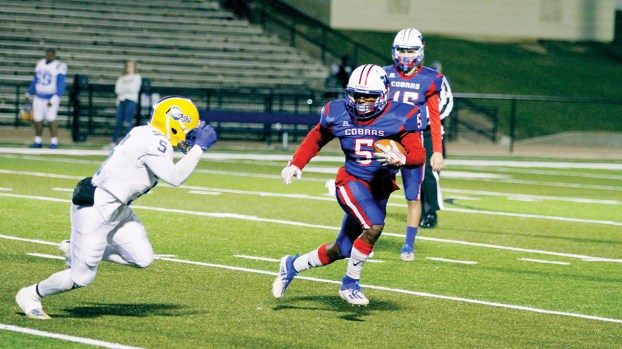 In a back-and-forth barn burner, the Wesson Cobras toppled the Bay Spring Bulldogs in the first round of the MHSAA 2A playoffs, 56-54 in overtime. The high-scoring contest saw numerous big plays and momentum shifts throughout the contest. The Cobras will take on the Union Yellowjackets next week as they defeated East Marion 35-0.

“I really don’t even what to say,” said Wesson head coach Jeremy Loy. “That was one of the greatest games I’ve ever been a part of and I’m glad we came out on the winning end. It was a fight. We have some leadership on this team, a quarterback that believes he can make any play on the field, wide receivers he can throw to, and we always know we can score.”

It didn’t take long for the points to hit the scoreboard as Wesson capped off the opening drive with a 27-yard touchdown pass from Will Loy to Chris Davis on just the sixth play from scrimmage to take an early 7-0 lead.

Bay Springs showed off their running ability on the ensuing drive as they marched 60-yards on 12 straight rushing plays. The ground-and-pound drive saw four first downs and was finished off by a one-yard run from Chase Wilson on fourth and goal. The Bulldogs completed the two-point try to take an 8-7 lead with 2:51 left in the first quarter.

After a Bay Springs fumble, Loy connected on back-to-back beautiful passes to Davis and a 36-yard strike to Antrelle Sims, which put the Cobras on the Bulldogs’ one-yard line. Loy punched it in himself and the Cobras’ two-point conversion was good, making it 15-8 Wesson early in the second.

The Bulldogs quickly responded and made the two-point try to take the lead, 16-15, but the Cobras’ balanced offensive was back in action. Big plays from Victor Davis, Sims, and Orlando Smith set Wesson up inside the Bulldogs’ and Loy hit Sims for the score. The point after failed, making it 21-16 Wesson with 5:25 to play in the first half.

Several Loy-to-Davis connections once again put the Cobras in great field possession on the Cobras’ next possession and Loy found Sims on a 50-50 ball in the corner of the end zone. Preston Lee knocked through the extra point to give the Cobras a 28-16 lead going into intermission.

Bay Springs kept the high-scoring action up on the first drive of the second half as Tyrick Jones broke off two would-be tacklers for a 55-yard score. Jones followed the big play up by plowing in on the two-point conversion cutting Wesson’s lead to just four, 28-24.

Just when the Bulldogs seemed back in the contest, Sims took the ensuing kickoff 70 plus yards to the house to get the home crowd back on their feet. The point after failed, which left the Cobras with a 10-point, 34-24, lead.

The Bulldogs immediately gave everyone in H.L. Stone Stadium déjà vu as Jones once again hit the open hole for a 55-yard touchdown run before running in the two-point try yet again. The quick score pulled the Bulldogs’ within three points, 34-32, with 5:30 remaining in the third.

After some defensive stands and a Wesson punt, the Bulldogs took over at their own 39 with 10:19 left in the game. Anthony Newell took a quarterback sneak up the middle and hit the open field for a 61-yard score. Wilson ran it in for the two-point play, putting Bay Springs on top 40-34 with 10 minutes to play.

The Cobras quickly found the end zone from 42-yards out as Loy hit Sims, putting Wesson back on top 41-40. The excitement was short-lived as Bay Spring’s Jamare Holiday took the ensuing 80-yards to once again swing the momentum. The two-point try put the Bulldogs up, 48-41.

Wesson drove down the turf and overcame a fourth and three situations before Loy and Sims once again connected, this time from 29-yards out for a touchdown and knotted the game at 48-all. That score would hold until the end of regulation, sending the game to overtime.

The Cobras had first possession and on the first play from scrimmage, the Loy-Sims chemistry was back on display with a 10-yard touchdown. After back-to-back encroachment calls on the extra point, Wesson decided to go for two. Jason Edwards punched through the line growing the lead to 56-48.

Bay Springs scored on their possession on a fourth and goal situation with a touchdown pass from Newell to Wilson, but the Cobras, with the help of the fans, made a heroic stop on the two-point conversion as they stuffed Jones at the line of scrimmage to secure the win.

“I told our guys that this is it, this is for the season, you stop him and we win,” said Loy. “Our guys all got to the ball and we ganged him up and protected our house. We have to build off this, get healed up by Monday, and get on the film to be prepared for next week.”

Will Loy finished the game with a staggering seven touchdowns with one on the ground, one to Davis, and five to Sims. Sims also posted the kick return touchdown to bring his total to six on the night.

2 in a row! BHS Panthers repeat as 5A cross-country champions

It was a total team effort from everyone wearing an Ole Brook racing bib Saturday at Choctaw Trails. That’s what... read more