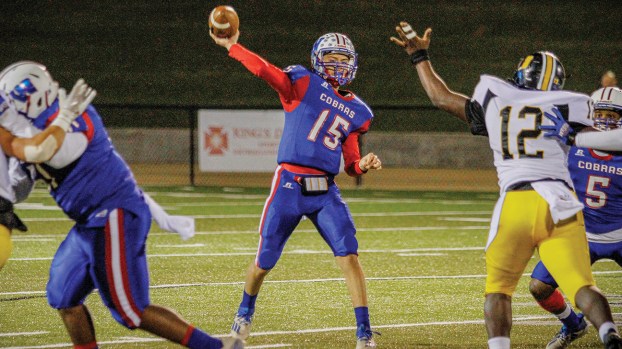 Photos by Lucas Calvert Wesson sophomore quarterback Will Loy rares back to pass Friday against Union High in the MHSAA 2A playoffs. A 64-44 win by Union moves them on to the third round where they’ll face defending state champion Taylorsville.

It was another slugfest for the Cobras this week as they went toe-to-toe with the Union Yellowjackets in the second round of the MHSAA 2A state playoffs. The teams combined for 108 points and loads of yardage in the offensive showcase, but the Yellowjackets walked out of H.L. Stone Stadium with a 64-44 victory. They will face Taylorsville next Friday as they defeated Philadelphia, 47-6. The loss ends Wesson’s season with an 8-3 record.

“They were a good team with size,” said Wesson coach Jeremy Loy. “We just didn’t play defense for two weeks in a row and gave up a lot of points, and you just can’t give up that many every week and expect to advance. Three turnovers also hurt us and we were just playing catch up.”

Wesson was marching down the field after picking off the Union opening drive, but a fumble deep in the Yellowjackets’ territory gave the ball back. Just four plays later Kenyon Clay connected with Jamarcus Jones for a 67-yard touchdown for the first score of the night. The point after was no good, making it 6-0 Union.

The Cobra’s next possession was cut short by an interception and the Yellowjackets rattled off seven rushes alternating between Jaylon Buckley and Clay. Clay capped the quick, 40-yard drive from just two yards out as the first quarter expired. The two-point try grew Union’s lead to 14-0 going into the second.

Wesson’s Antrelle Sims lit up the field at Stone Stadium for the second straight week on the ensuing kickoff as he took it 80-yards to the house. The extra point was wide right, which cut the Yellowjackets’ lead to 14-6.

The fireworks continued as Clay and Jones once again connected on a long score on the next drive. On just the second play from scrimmage Jones took a pass 52-yards for the score, making it 21-6, Union.

The Yellowjackets’ continued to grow their lead and momentum as Clay ran it 40-yards for a score on the first play after a Cobra fumble, which put Union on top, 28-6, with 10:41 remaining in the first half.

The Cobras did not flinch as they manufactured a nine-play, 55-yard drive that saw numerous connections from Will Loy to Sims, Chris Davis, and Jason Edwards. Collin McGowan finished it off with a nine-yard run for Wesson’s second score of the night. The point-after attempt was no good, which kept Union on top, 28-12.

Another lengthy Union drive grew the lead to 34-12, but Wesson took back over with 1:33 remaining in the half and a short field. Six plays later, Loy threw a beauty to the corner and found Sims from 19-yards out. The two-point conversion cut the Yellowjackets’ lead to just 16, 34-18, going into the break.

Wesson got the crowd on their feet on the first drive of the second half as Sims caught a tipped pass for a 58-yard score on just the third play from scrimmage. The two-point try was good as Edwards barreled through the line, making it 34-26, Union.

The remainder of the third was all Union as the Yellowjackets scored 16 points with the help of a safety, which grew the lead to 52-26 going into the final 12 minutes.

The fourth quarter did not disappoint in entertainment as the teams’ traded punches and combined for five more touchdowns. Wesson added three scores, a run from Edwards, a completion to Edwards, and a score from McGowan, but it was not enough as the Yellowjackets won, 64-44.

“These seniors that I’ve had, have been a great group of young men all the way up since eighth grade,” said Loy. “We were fortunate to play every game this year and got to end our season on the field, there were several forfeits this week, and to not have to do that means a lot to our young men…it’s always disappointing to lose and we wanted a crack at Taylorsville, the defending champs, but that Union team is going to give them a good run in a week.”