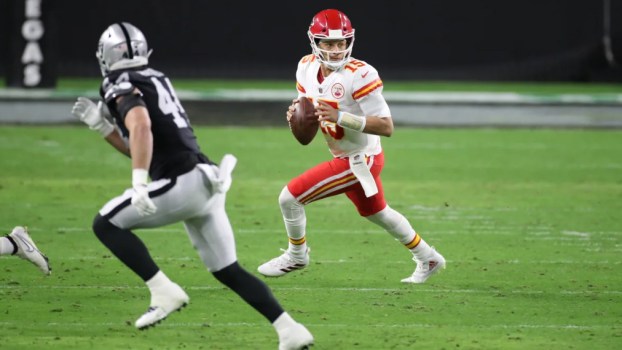 Photo by the Kansas City Chiefs / Chiefs QB Patrick Mahomes looks for an opening during Sunday's game against the Las Vegas Raiders.

(AP) — Even after Jason Witten’s touchdown put the Las Vegas Raiders ahead with 1:43 to play, the mood on the Kansas City Chiefs’ sideline was calm and cool.
Not much can stop the Super Bowl champs lately. Not when they have the quarterback who makes everything go.
“We’ve got Patrick Mahomes,” running back Clyde Edwards-Helaire said. “I’m not worried about anything.”
Mahomes threw a 22-yard touchdown pass to Travis Kelce with 28 seconds to play, and the Chiefs avenged their only loss in the last 12 months with a 35-31 victory over the Raiders on Sunday night.
Mahomes passed for 348 yards and led two go-ahead scoring drives in the frantic fourth quarter for the Chiefs (9-1), who split their season series with Las Vegas (6-4) in dramatic fashion. Kansas City also took firm control of the race for its fifth straight AFC West title with an assertive comeback in its closest rivals’ home building.
“I’d take him over everybody,” Chiefs coach Andy Reid said of Mahomes. “And I’m lucky to have him, as we are as a football team, as we are as a city. When you’re behind, he can make things happen.”
The Chiefs’ supreme confidence in their Super Bowl MVP wasn’t shaken when they lost 40-32 at home to Las Vegas last month, prompting the Raiders to take a celebratory victory lap around Arrowhead Stadium in their buses.
Kansas City also didn’t worry when Mahomes threw only his second interception of the season late in the first half of the rematch.
And when Derek Carr found Witten for the Raiders’ go-ahead score, Mahomes said he knew what would happen next.
“We’re going to score,” Mahomes said. “I just didn’t know if it was going to be overtime, or we were going to win it.”
The Chiefs didn’t need a tying field goal: They only needed 75 seconds to march 75 yards, with Mahomes going 6 of 7 on the drive.
Kelce, who caught eight passes for 127 yards, slipped free of Las Vegas’ safeties for the easy winning catch and then went back to the sideline to give a joking shoulder massage to Reid. The Chiefs can laugh at fourth-quarter tension, thanks to the man behind center.
“He turns it up when it matters the most, and he was out there showing out tonight,” Kelce said about Mahomes.
Carr passed for 275 yards and three touchdowns, but the Raiders couldn’t match their offensive excellence in Kansas City last month. The Chiefs have won five straight since that defeat, and the Raiders made just enough minor mistakes to prevent them from getting out of reach of Mahomes’ comeback ability.
“It’s as good as you can play,” Raiders coach Jon Gruden said of Carr. “He had four or five balls that were magnificent throws that we could have caught that we didn’t make the play on. He played tremendous tonight. He played almost flawless.”
The Raiders led 24-21 on Darren Waller’s TD catch on the first play of the fourth quarter, but Mahomes led a 91-yard scoring drive midway through the period capped by Le’Veon Bell’s first TD for Kansas City on a 6-yard pitch.
Carr and the Raiders replied with a crisp drive ending on Witten’s 1-yard catch just inside the goal line for his second TD with the Raiders and the 74th of his career.
“You’re really excited,” Carr said. “(But) they’re a real good offense, too. They go down the field, they score. The wave, the range of emotion — you try your best to stay even-keeled. You try your best not to get frustrated.”
That’s not easy when your counterpart is Mahomes.
Daniel Sorensen picked off a heave to midfield by Carr with 19 seconds left, and the Chiefs kneeled out their 18th win in the last 19 games since Nov. 10, 2019.
Nelson Agholor caught a TD pass and Josh Jacobs rushed for a score for the Raiders, who dropped to 2-3 at Allegiant Stadium in their new hometown.
Tyreek Hill caught an early touchdown pass for the Chiefs, and Edwards-Helaire rushed for 69 yards and two TDs in a fierce rivalry game. These teams’ mutual distaste was obvious, with plenty of confrontations and yapping after whistles. Kelce and Johnathan Abram had particularly active mouths.
“The rivalry between the Raiders and the Chiefs, I think, is a great thing for football,” said Reid, who improved to 19-3 after his bye week. “It’s great to be a part of it. I look forward to more future challenges like the ones they presented against us.”
The teams traded touchdown drives on the opening four possessions. Agholor made an exceptional toe-tap 17-yard TD catch to end the first quarter, but Edwards-Helaire’s first TD evened it at 14.

SHORT-HANDED
Las Vegas’ defense hung in against the high-powered Chiefs despite having nine players on the reserve/COVID-19 list earlier this week, essentially preventing the defense from practicing for its toughest opponent. Six of those players returned for the game, but the Raiders still played without starters Cory Littleton and Clelin Ferrell.