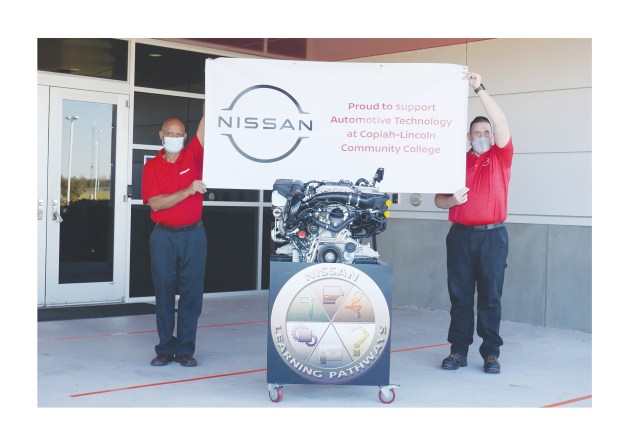 Copiah-Lincoln Community College’s Automotive Technology program recently received a gift from Nissan in the form of 12 engines in November.

“This is something that’s been in the works for a while,” Dean of Career and Technical Education Brett Duguid said.

Program Coordinator Blake Oberschmidt said this donation from Nissan isn’t the first time the company and the college have worked together.

“We’ve been partners with them for several years now,” Oberschmidt said.

“Whenever they have training materials for the program, they’ll donate them instead of scrapping them.”

Nissan has been a partner to the college not only in the career and technical division, but also to Co-Lin’s workforce education division. Nissan employs many Co-Lin alumni from a variety of different programs.

The engines that have been donated came from 2019 Nissan Altimas.

Oberschmidt said these were test engines Nissan completed research and development on. Once the company was finished with the engines, they were donated to the college.

The engines will be used for the engine rebuilding class offered in Oberschmidt’s program. He said this donation was important to the program.

“It’s big, it puts modern technology in the hands of the students,” Oberschmidt said. “It allows every one of my students to have an engine to train and learn on.”

Oberschmidt hopes his students are able to learn as much as they can from having these pieces of equipment provided.

“I hope that they get the quality training that they deserve along with the modern technology,” Oberschmidt said.

The Mississippi School of the Arts recently dedicated its newly planted gardens and arboretums. In a ceremony hosted on MSA’s... read more