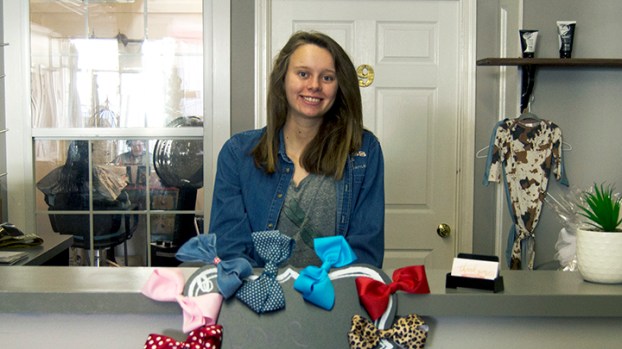 A Brookhaven woman has opened a children’s boutique downtown.

The store offers sizes 0-3m to 5T, with plans to offer more in the works.

“We’re looking at expanding to larger sizes in the future,” Scott said.

When asked about why she decided to open a children’s clothing boutique, Scott said it was to give Brookhaven residents more options.

“In Brookhaven we have children’s boutiques but they’re more expensive,” Scott said. “So I was trying to offer something that’s a little more affordable but still offer really cute clothes.”

After she developed her idea, she began working on it. Her business is a one-woman show.

“I just looked into it and pretty much got started right away with ordering things online,” Scott said. “It’s just me doing it.”

Scott shares a space with Marlana Pepper of Glimpse of Faith Salon.

“She has the salon in the back and I sell clothes in the front,” Scott said.

While she currently does not specialize in anything, KaityB’s has a large assortment of bellbottoms for little ones.

“I have a lot of bellbottoms, because that’s what people have been wanting,” Scott said.

Scott said business in her store space has not been as frequent as her online sales.

Her favorite thing about her business is the freedom of not having to show up for a regular job everyday.

She could have opened any type of clothing store, but she chose children’s clothing because she saw a need in the area.

“I feel like Brookhaven has enough women’s boutiques,” Scott said.

She chose the name KaityB’s because her initials before she was married were “KTB.” So she thought it would be a good fit for her business.

Scott hopes to make a living for herself and her soon-to-be family of four.

“I’ve always wanted to have a kid’s clothing boutique,” Scott said. “And this gives me an opportunity to spend more time with my family.”

A new spec building in Linbrook Business Park is getting some attention, though it is still in the early stages... read more