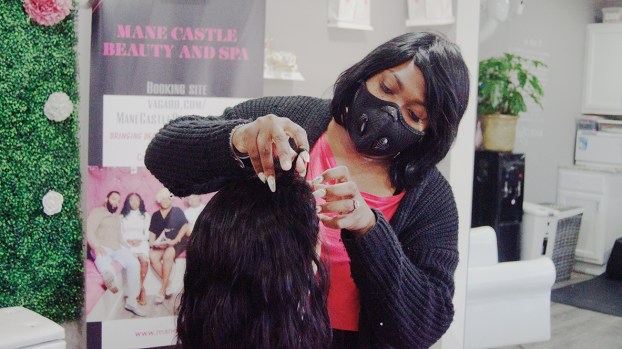 Photo by Gracie Byrne Business owner Tiffany Collins demonstrates a styling technique on a wigged mannequin at her shop Tuesday.

A new beauty salon and spa has opened in Brookhaven.

Brookhaven native Tiffany Collins is the owner of Mane Castle Beauty & Spa. Collins began remodeling her space in April and opened her doors in September.

She started working as a cosmetologist in 2000. Before that, Collins attended nursing school at Alcorn State University. But it wasn’t for her.

“It wasn’t where my heart was,” Collins said.

Collins learned how to cut hair at an early age and was cutting people’s hair by the age of 12. In 1998, she attended cosmetology school at Copiah-Lincoln Community College and graduated from the program in 1999. For her, cutting hair runs in the family.

“My mom is a cosmetologist and that’s who inspired me,” Collins said. “And my stepdad is a barber.”

She worked in the area until 2014, when she went to work at JCPenney’s salon in McComb. After working there for three years, she was promoted and transferred to the JCPenney salon in Jackson.

She moved up the ladder and eventually became manager of both the salon at JCPenney and Sephora at Northpark Mall. But when the pandemic hit she made the decision to move back home.

“I decided to take what I learned and come back home,” Collins said.

After acquiring the property on East Warren Street where her business is located, she began the renovation process.

“I just wanted to redo everything,” Collins said. “I wanted it to be different.”

“We’re just trying to bring different things to the community,” Collins said. “They want it done, they just can’t get it done here (until now).”

Collins said her business is important to her because it’s her passion.

“I’ve been doing this all my life, I’ve never had another job,” Collins said. “I love changing people’s beauty from the inside out. People can come in and sit down, and you can build their confidence.”

“It’s not just about the hair, its’ about changing them from the inside,” Collins said. “When someone looks in the mirror and sees their complete look, that’s what I like.”

She chose the name “Mane Castle” because she handles people’s hair and because she wants her customers to leave feeling like royalty.

“This is like a castle to me,” Collins said. “I want people to feel relaxed, I want them to get an experience they can’t get anywhere else, and I want them to feel like they have our undivided attention.”

“I don’t consider this a job. I come to work to inspire people everyday,” Collins said. “I just love hair.”

Santa Claus is coming to downtown