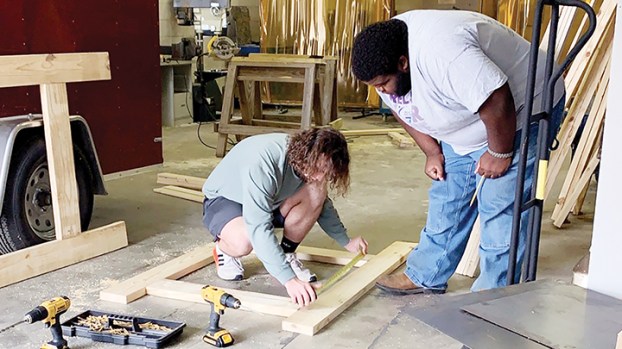 Students want no kid to sleep on the floor

The Future Farmers of America at Enterprise Attendance Center has built five beds for those in need.

Agriculture instructor Mollie Goldman works with her students to help those who don’t have a place to rest their heads at night. The “No Kid Sleeps on the Floor” initiative, something the school’s FFA chapter participates in, provides beds to children who don’t have them.

Goldman and her students have been participating in the initiative for four years now. She got the idea from another FFA chapter and brought it to Enterprise.

“We’re the only one in our area that does it,” Goldman said.

Goldman and her students work on beds throughout the school year, but the demand often goes up during the holidays.

“It’s kind of constant,” Goldman said. “It always feels like someone calls before Christmas.”

The program builds a variety of beds both big and small.

The FFA chapter has about 20 students, grades nine through 12.

“I try to involve as many as my classes as possible,” Goldman said.

The chapter recently completed five beds in time for the holidays, which included two toddler beds, two twin beds and one bunk bed.

Once the beds are completed, the group collects mattresses and bedding to supply with the bed frames.

“I always try to get mattresses and bedding to go with them,” Goldman said. “Just because the bed frame doesn’t do any good without the other things.”

For the chapter, five beds at the same time is a large amount.

“Five is probably the most we’ve built and delivered at once,” Goldman said. “We’ve probably done 30 beds over the past three or four years.”

Goldman said her students love the project just as much as she does.

“They love it,” Goldman said. “They always fight over who gets to go and deliver them.”

Goldman believes the experience is good for her students.

“It’s really eye opening for them,” Goldman said. “They don’t understand that level of need. The students get as much out of it as the kids who are getting the beds.”

Goldman hopes the beds provide a sense of security to the children receiving them.

“A lot of people don’t think about that some people don’t have a place to rest,” Goldman said. “It’s such a basic need people take for granted.”

Goldman talked about an occurrence where her and her students delivered beds to a household that had five kids sleeping in one bed.

“They were so excited to have their own bed and not have to share it,” Goldman said. “I hope that my kids see that you don’t have to do big things to help other people.”

400 doses of COVID vaccine are here