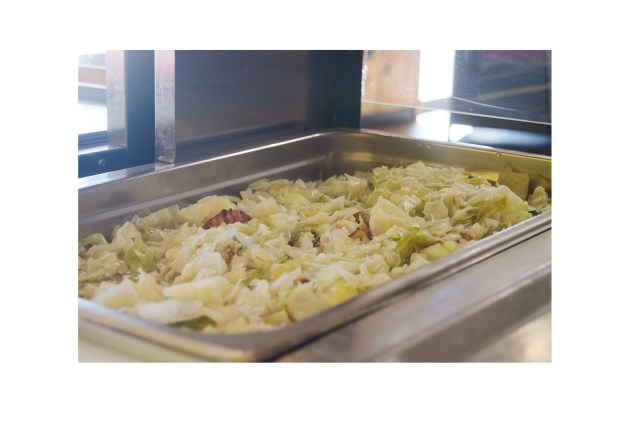 Photo by Gracie Byrne Cabbage, which is meant to bring good fortune or money in the New Year, is a staple at Newton’s restaurant.

As the owner of Mama Ruby’s, Jeff Newton knows a thing or two about soul food. For him, it’s his livelihood. Growing up, it was a part of his life.

For Newton and many others in Mississippi, eating certain foods on New Year’s Day is a tradition. These foods include pork, black-eyed peas and cabbage.

Each food has its own meaning and when eaten, it signifies what one wants to see in the New Year.

“The black eyed peas mean prosperity and the cabbage means money and good fortune,” Newton said. “The pork is very popular for the New Year as well, but I’m not sure of the meaning.”

According to delish.com, pork is meant to bring progress for the New Year.

“I grew up in a cooking family and good eating was always around,” Newton said. “Cabbage and black-eyed peas are two of my ultimate favorites. So those were always a good sight to see.”

To go with the tradition of eating these foods, many people say that if these foods aren’t consumed on New Year’s Day then one could miss out on the good luck that comes from it.

“I heard that a lot growing up,” Newton said. “A lot of folks eat it for faith’s sake and tradition’s sake.”

Newton, who previously worked at Piggly Wiggly on Hwy. 51 saw the most sales in black-eyed peas and cabbage during this time.

“We sold cabbages by the bins and black-eyed peas by the cases at Piggly Wiggly,” Newton said. “It was unreal, you couldn’t keep it on the shelf.”

With the way 2020 has been, more people may take the tradition seriously. Newton seems to think so.

“2020 has been something,” Newton said. “I’d definitely say so, with the way people have been struggling this year.”

A Tuesday morning wreck has resulted in one fatality

Two Lincoln County men were involved in an accident that resulted in a fatality. On Dec. 29, Mississippi Highway Patrol... read more