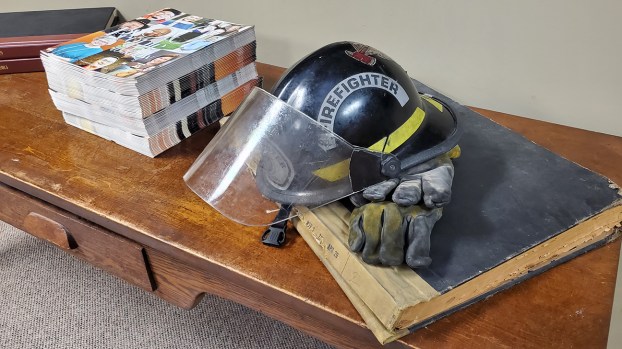 Photo by Brett Campbell Fire fighters from Brookhaven Fire Department Station 2 responded to a call of smoke in the building at the North Railroad Avenue offices of The Daily Leader Thursday morning. Damage was contained to a faulty fan.

Fire fighters with Brookhaven Fire Department Station 2 responded at 7:34 a.m. Thursday to a call of smoke in the offices of The Daily Leader, 128 North Railroad Ave.

When news editor Brett Campbell arrived at the office at 7:30 a.m., he discovered smoke in a large portion of the building and an acrid smell. A call to emergency services was answered quickly and fire fighters moved through the building to ascertain the cause of the smoke and eliminate the problem.

The cause of the smoke was determined to be a faulty bathroom fresh air fan which had burned up.

The fan was disconnected and removed by responders and no further damage was found.

“The quick response of the Brookhaven Fire Department this morning was impressive and appreciated,” Campbell said. “Without it, things could have gotten much worse.”

“We are grateful to both the individuals who responded and all other fire fighters and first responders who work so hard to keep the public safe, including the calm, professional assistance of the 911 dispatcher,” he said.

Coronavirus numbers go up as New Year closes in