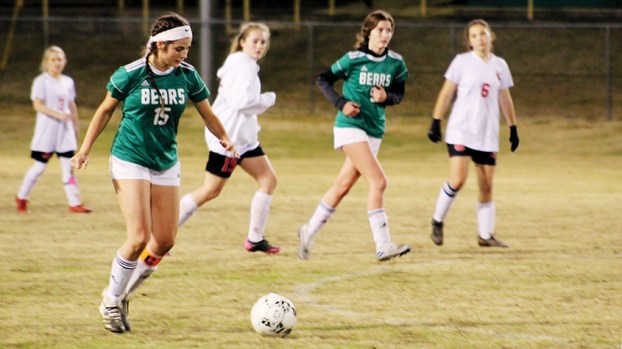 Loyd Star and West Lincoln each win one in soccer matchup

While Loyd Star and West Lincoln were meeting inside the gym Tuesday for hoops, the same rivalry was also being played just steps away on the football field as the Bears and Hornets tangled in region soccer action, as well.

In the opening girls’ game, the Lady Hornets (11-2) continued their push for a postseason berth with a 6-2 win. In the boys’ match West Lincoln avenged a loss from earlier in the season by beating the Hornets 2-1.

Loyd Star got a pair of goals each from Mary Claire McCurley, Abby Burnette and Alli Ferguson in the girls’ win. McCurley also assisted on two goals while Brooke Cade and Burnette made an assist each.

“The girls came out to play,” said LS coach Jordan Lea. “We had a much better showing than we did the last time we played West Lincoln.”

The two teams met prior to the Christmas break with LS taking a 5-2 win on Dec. 17.

The WL boys’ team got one goal from Noah Addison and another from Briar Hamilton in their win. Chase Spring provided one assist while Joshua Thornhill added one as well for the Bears.

“Effort and hear weren’t the issues tonight for us,” said Lea. “We just made too many mistakes that we don’t usually make and that cost us the game. Hats off to West Lincoln for a well-played game.”

The West Lincoln boys are tied with Bogue Chitto at 4-2 in Region 7-1A/2A/3A standings for second place. On the girls’ side Loyd Star is firmly staked at second place with a 5-1 record and only trails unbeaten Franklin County.

The top two teams in each division make the playoffs.