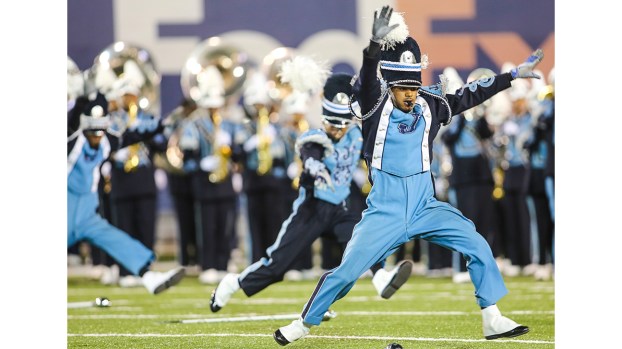 Photo by JSU / Sonic Boom of the South

The Jackson State University band is scheduled to be a featured band in Tuesday’s presidential pre-inauguration ceremony, and local alumni are thrilled about it.

Louis Parker Jr. of Brookhaven, a recent Jackson State graduate and former member of the Sonic Boom  band, is excited.

“When I found out, I was overjoyed because JSU is getting some amazing exposure,” he said.

The university announced Monday that the “Sonic Boom of the South” would be a part of the “We Are One” virtual event Tuesday evening, the historically Black college said in a statement Monday. The show was one of several such official inaugural events marking President-elect Joe Biden and Vice President-elect Kamala Harris’ swearing-in Wednesday.

Harris and other Black leaders were also expected to speak during the livestreamed show, which the school said will “honor the Black community and African Diaspora through powerful speakers, inspiring stories and musical entertainment.”

“Being invited to participate in the virtual inauguration activities for President-elect Joe Biden and Vice President-elect Kamala Harris is one of the most prestigious honors bestowed upon our program,” said Jackson State band director Roderick Little. “This is a historical mark in the history of civilization, and our students get to partake in this event and be immortalized in the storybook of this great nation.”

Tony Allen, CEO of the Presidential Inaugural Committee, said the event is supposed to mark “coalitions that make up the nation coming together to celebrate a new chapter in history.”

The Sonic Boom marching band was started in the 1940s and was dubbed the “Sonic Boom of the South” in 1971. The university was joined by other HBCUs in a Battle of the Bands, including South Carolina State University’s Marching 101 and Southern University’s Human Jukebox Marching Band.

“We’ve always known that students of HBCUs received quality educations and are large contributors to society,” Johnson said. “This is an opportunity to put some of those talents on display.”