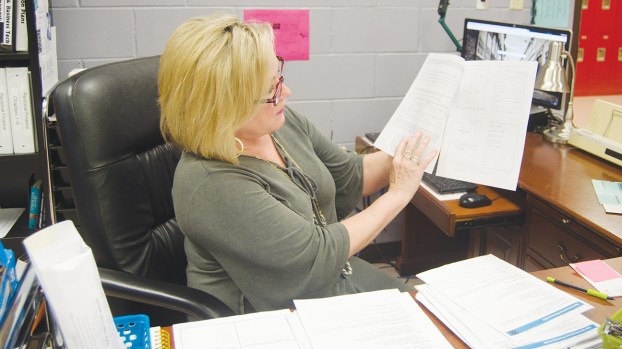 Photo by Gracie Byrne Loyd Star computer science teacher Sherry Davis goes over a handout for one of her classes.

Some Lincoln County students are learning to work together in their Exploring Computer Science class.

In a classroom at Loyd Star Attendance Center, computer science teacher Sherry Davis has been teaching ninth-graders how to build applications that can be used on their cell phones.

“They had to follow their handouts step by step,” Davis said.

Students are building their own applications on Code.org. They were required to pair up and come up with six ideas and discuss with one another until they agreed on a single idea.

Once students had an idea, they interviewed other classmates to see what they knew or didn’t know about the topic of their idea.

“As they build their app, they’re feeding off of each other,” Davis said. “They also asked each other questions about the building process. It’s all about working together.”

Davis said the goal of the project is for everyone in the class to test each other’s applications. Before that comes, students will go through a troubleshooting period once their apps are live.

“You don’t just need to jump in,” Davis said.

Ideas have ranged from health and wellness, traveling, movie trivia and even job training. Davis thinks the project is a good idea for her students because the world is centered around technology.

“Everything in your life just about can be taken care of or summed up through an app,” Davis said. “It’s where we are.”

Davis hopes her students learn that teamwork is important.

“I hope they learn that when you’re trying to come up with a solution for something, you don’t have to be by yourself,” Davis said. “You’ve got other people you can talk to and collaborate with. The world is about collaborating.”

A new Senate bill could bring mobile sports betting to Mississippi. The present law says anyone wagering on a sporting... read more