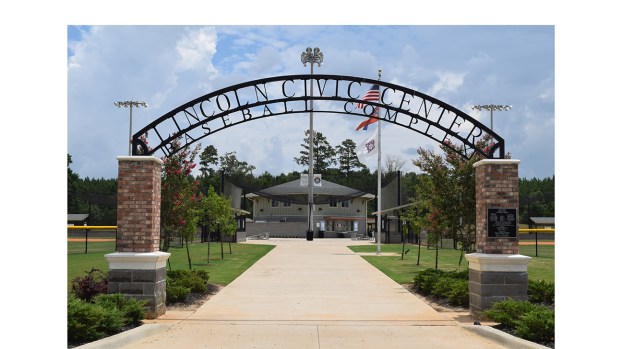 FILE PHOTO The Lincoln County Board of Supervisors has given its OK for the Lincoln Civic Center to host travel league baseball again, as long as Covid 19 guidelines set out by the governor’s office are followed.

Brookhaven will still see Dixie League baseball this year despite the pandemic.

This affected the number of parents in the stands and cash flow into the civic center due to the concession stands being closed.

LCC Director Quinn Jordan is hopeful this year will be different, even thought last year’s season didn’t produce any outbreaks tied to the center.

Sign up ends Feb. 15 and is open to children living in Lincoln, Copiah or Franklin counties.

Practice will start March 3 once all of the teams are drafted.

Children who are ages 6-12 are eligible to participate. The age groups for the league are six, seven and eight, nine and 10 and 11 and 12.

Jordan said the civic center will enforce COVID-19 guidelines like they did last year.

One major guideline is having 100 spectators per field maximum.

“We encourage all parents and teams to make sure the previous game is over and the field has been cleared before new teams come to dugouts,” Jordan said.

There will be hand sanitizer stations located across the complex as well. Fans will need to bring their own chairs this year, because the bleachers won’t be available.

The kickoff jamboree will be March 20 with regular season games starting on March 22.

Games will be played on Monday, Tuesday and Thursday. Makeup games will be the first Friday or Saturday following a rainout.

Jordan said things are already looking up for the 2021 season.

“We’ve already signed contracts for about a dozen travel ball tournaments this summer, so that’s what we have to schedule our makeups around,” Jordan said. “We’re in line to host both a district and state tournament and we’re hosting age nine and age 11 state tournaments. We’re in consideration for the 2023 World Series.”

The concession stand will be open this year and will follow executive orders released from the governor’s office regarding baseball complexes.

“We just follow all the orders and we’re good to go,” Jordan said.

For Jordan, it was more important to have the season for the community than for the sake of the complex.

“I still felt like it was more important to get the season in,” Jordan said. “But we felt like the public service of the league was more important than the cash flow. Kids, like adults, need social interaction and by doing this in a safe and social distanced manner, we’re able to provide that to the kids to get them out of the home and around each other.

Mississippi’s Thomas is first woman to officiate a Super Bowl

A Mississippi native will be the first woman to officiate a Super Bowl game when the Kansas City Chiefs and... read more