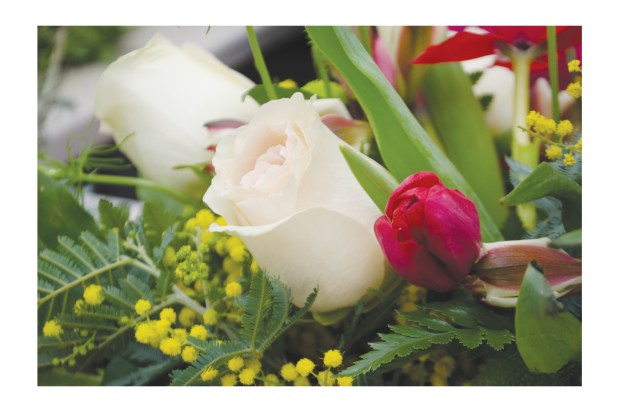 A floral arrangement Anders prepared for a Friday delivery.

Area florist said love is here to stay despite COVID-19

This year, Valentine’s Day is on Sunday. Couples young and old will be spending quality time together and exchanging gifts in honor of the patron saint Valentine.

Florist Elaina Anders described this year’s season of love as being busier for her business.

“It’s been more spread out,” Anders said. “But it’s been busier. The pandemic has affected us. I think that a lot of people are concerned about coming in stores, which has led to more deliveries.”

Businesses such as hers see a major flow of orders during this time, but Anders believes that without the pandemic looming things could have been busier.

This week Anders has been preparing floral arrangements, gift baskets and candy bouquets — all in the name of love.

Not only has the pandemic affected customers coming into her store, it’s affected how her business receives supplies.

“It’s a lot,” Anders said. “You (as a business owner) have to be way more prepared in advance for your orders. Amazon used to come in two days — not anymore.”

Anders doesn’t believe the pandemic will affect Valentine’s Day, and that couples will still celebrate as normal.

“People are just ready to get back to normal, and they’ve adjusted,” Anders said. “They still want to go out and do stuff.”

A major consequence of the pandemic has been great loss of life. Anders believes people will see the holiday in a new light because of this.

“I feel like people have realized what they’ve taken for granted, having lost like they’ve lost this year.”

Whether it is realized it or not, the pandemic has affected how people love each other.

“I feel like it shows you what you took for granted, how easily someone can be taken from by something you can’t see,” Anders said. “There’s someone that’s supposed to be there, and then all of a sudden they’re gone.”

As a florist, working in the funeral industry has allowed Anders to see the ugly side of the pandemic, with death tolls skyrocketing as time went by.

“People’s hearts are broken,” Anders said. “It’s made people not take each other for granted.”

Anders hopes people can love each other despite everything going on this Valentine’s Day.

Lawrence County Hospital in Monticello recently received a $9,000 donation from Georgia-Pacific Monticello. The funds will be used for general... read more