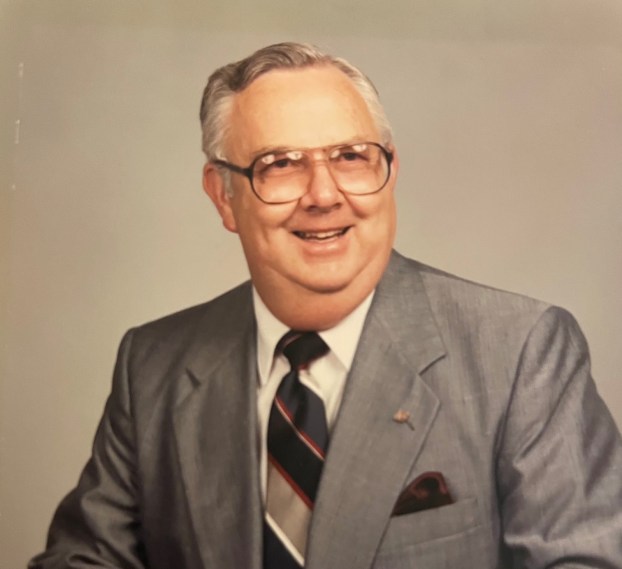 Frederick Joseph “Jerry” Rein, son of Clarence Richard Rein and Ethel Ready Rein, was born on January 25, 1931, in Meridian, MS.  He passed away at the age of 90 on February 13, 2021, in Madison, MS.   While a student at Meridian High School, Jerry held several jobs including working at First National Bank in Meridian, which began a long and enjoyable career in the banking industry.  Upon graduation from high school, Jerry enlisted in the U.S. Marine Corps and served in the First Marine Division, Chief of Staff Section, during the Korean War.  As a 19-year-old, he fought in the Battle of the Chosin Reservoir, an epic battle often referred to as the “Frozen Chosin” due to extreme frigid temperatures.

Upon completion of his service in the Marine Corps, Jerry returned to Meridian to marry his high school sweetheart and the love of his life, Nell Young Rein, and to continue his education.  While working at First National Bank in Meridian, he graduated from Meridian Junior College and completed his BS degree from State Teachers College in Livingston, AL (University of West Alabama).

In 1963, the Reins moved to Brookhaven, MS, where Jerry continued his career with Brookhaven Bank and Trust Company.  Jerry took great pleasure is finding ways to help his customers achieve their financial goals.  During his career, he was responsible for a number of advancements in the local market including the introduction of main frame computer systems and ATMs.  Rein retired in 1993 as Executive Vice President of Trustmark National Bank, the successor of Brookhaven Bank, and remained on the Advisory Board for many years.

Rein was a graduate of the School of Banking of the South at Louisiana State University and completed the Commercial Bank Management program at Columbia University and the Senior Bank Officers Management program at Harvard University.  Jerry served as president of the following organizations in Brookhaven:  Junior Chamber of Commerce, Lions Club, Brookhaven/Lincoln County Chamber of Commerce, United Fund of Lincoln County, and the Saint Francis School Board.  He also served as treasurer of the Lincoln County March of Dimes and the Lincoln County Red Cross.  He formerly served on the Zoning Committee for the City of Brookhaven and on the Bank Operations Automation Committee for the Independent Bankers Association of America (IBAA). He was also a member of the Mississippi Bankers’ Association and was recognized for 50 years of service to the industry in 2001.  Rein served two terms as Mississippi Executive Councilman on the Board of the Independent Bankers Association of America and two terms as State Director of the Louisiana-Alabama-Mississippi Automated Clearing House Association.  He served as President of the Krewe of Ceres in 1988 and was King of the Krewe in 1992.  Rein was appointed in 1995 by Governor Fordice to the Board of Directors of the Mississippi Home Corporation, where he served two terms.  He was a member and past treasurer of Saint Francis of Assisi Catholic Church.

While he had many accomplishments, Jerry’s pride and joy was his family.  He eagerly  followed their activities and supported them in every way imaginable.   Jerry’s deep love, concern and wise counsel will remain an inspiration.  Jerry is survived by his son, F. Joseph “Joey” Rein, Jr., daughter-in-law Alice Watkins Rein, and grandsons William Joseph Rein and Richard Watkins Rein. Preceding him in death were his parents, Clarence and Ethel Rein, brothers Clarence Richard “Dick” Rein, Jr., and John Ready Rein, and his dear wife of 46 years, Nell Young Rein.

The family expresses their sincere gratitude and appreciation to the staff of Saint Catherine’s Village and Kindred Hospice for the compassionate care provided to Jerry.  In lieu of flowers, memorials may be sent to Galloway Memorial United Methodist Church, P. O. Box 1092, Jackson, MS  39201, or King’s Daughters Medical Foundation, P. O. Box 3285, Brookhaven, MS 39603, or a charity of your choice.  The family will hold a private service at a later date.

Phillip Stephen Myers of Brookhaven, MS, passed away peacefully on February 9th 2021 of complications from Covid-19. He was preceded... read more