House advances bill that would politicize MS Archives and History board 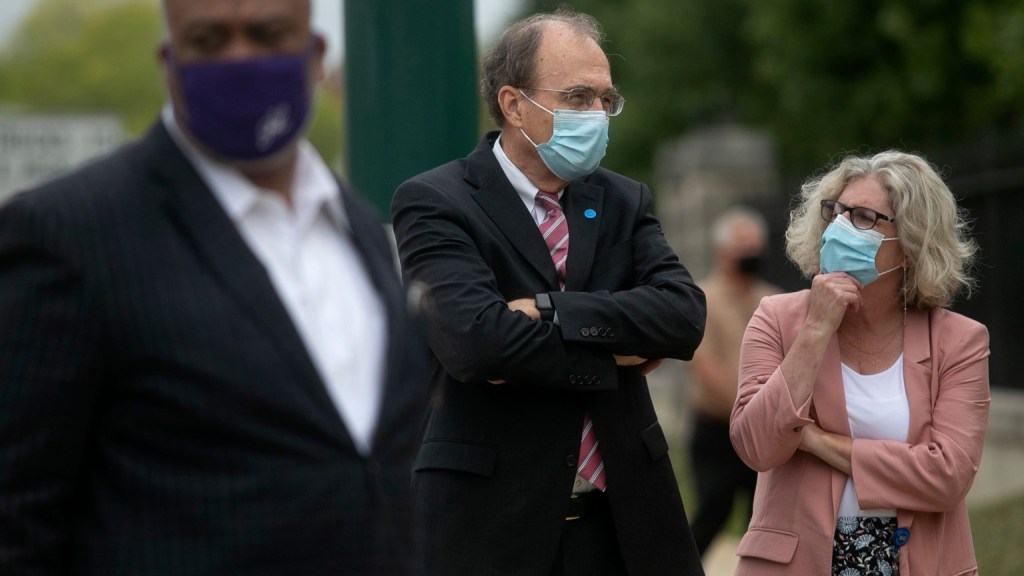 Mississippi Lt. Gov. Delbert Hosemann, left, and Executive Director of Mississippi Department of Archives and History Katie Blount speak outside of the Old Capitol in Jackson on Tuesday, Aug. 25, 2020.

A bill that has angered many state historians would have the governor and lieutenant governor appoint members to the board that oversees the Mississippi Department of Archives and History, a move opponents say would politicize an agency that has remained above that fray for more than 100 years.

“This is an outrage,” said Sen. Hob Bryan, D-Amory, a vocal opponent of the bill. “… I don’t know of any other board or agency that has for decades been running so well. Changing the board to a bunch of political appointees is very troubling … They’ve been insulated from the political whims of the moment. Where would we be if (former Gov. Ross Barnett, a segregationist) had appointed Archives and History board members?”

Currently the nine-person board’s members appoint their own successors, a “self-perpetuating” board, subject to state Senate confirmation of members. MDAH preserves and provides access to the state’s archives and records, does historic preservation work for the state’s historic sites and structures and runs numerous museums, including the world-class Mississippi Civil Rights and Mississippi History museums.

Senate Bill 2727, authored by Sen. Mike Thompson, R-Long Beach, would have the governor and lieutenant governor name board appointees, subject to Senate confirmation. The bill passed the Senate and this week was passed by a House committee, but only after it made changes that would ensure more deliberations, and a trip back to the Senate, before it could be passed into law.Thompson, during Senate committee work, said the change would simply bring Archives and History’s board appointments in line with many others — political appointments by the state’s elected executives.

Sen. John Polk, chairman of the Senate Accountability, Efficiency and Transparency Committee that first handled the bill, said having the governor and lieutenant governor make appointments would bring new thought and ideas to the board, and prevent myopic thinking.

But 46 Mississippi historians, many from the state’s colleges and universities and from the Mississippi Humanities Council, penned a letter urging lawmakers to “not interfere with the independence of an entity that has done so much good work for our state.”

“As scholars and teachers of history at Mississippi’s colleges and universities, we have benefitted from the considerable resources of the Department of Archives and History,” the historians wrote to lawmakers. “Whether conducting research in its vast archives, examining its artifacts spanning 13,000 years of Mississippi history, or participating in one of the Department’s many public events, we have directly experienced the incredible asset of a competent and well-run state history department.”

The historians said MDAH has become one of the most respected such agencies in the country. They said its running of the Civil Rights and Mississippi History museums “has rightfully garnered nationwide praise and acknowledgement” and the “Two Museums” have become one of the state’s largest tourist attractions since opening in 2017.

“Last year, the department also modeled for the world how to navigate historic moments in a way that embraces the future while respecting the past,” the historians wrote. “The Department showed integrity, dignity, and transparency throughout its role hosting the Commission to Redesign the Mississippi State Flag … As a direct result of the Department’s leadership, the process was dignified and helped bring Mississippians together like few events in the state’s long history.”

The historians pleaded with lawmakers to not interfere with the independence of the agency and suggested to improve it, “what is needed is an increase in funding.”

“Please do not politicize its board of trustees,” the historians wrote.