Why Mississippi teachers work 2nd jobs to get by 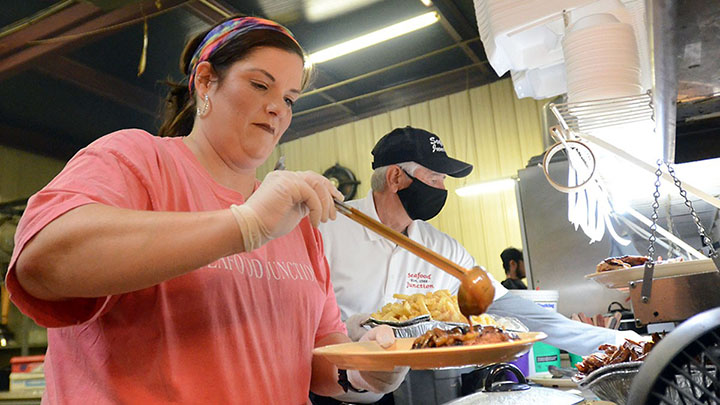 Chanda Ferguson fills a call-in order at the Seafood Junction in Algoma, Miss. Working at the restaurant is Ferguson’s second job. She is also a teacher at South Pontotoc Elementary School. Credit: Vickie D. King/Mississippi Today

Chanda Ferguson fills a call-in order at the Seafood Junction in Algoma. Working at the restaurant is Ferguson’s second job. She is also a teacher at South Pontotoc Elementary School. Credit: Vickie D. King/Mississippi Today

A teacher with nearly two decades of experience in schools across Mississippi, Chanda Ferguson has done everything she can to raise her salary to support her family, including three kids.

In addition to having a master’s degree, she is National Board Certified, the highest certification a teacher can achieve. The certification process costs money, but the state reimburses the costs, in addition to awarding anywhere from a $6,000 to $10,000 increase in salary for certified teachers.

Ferguson, a kindergarten teacher in the A-rated South Pontotoc Elementary School, considered going for her doctoral degree to get a $5,000 yearly bump in pay. The problem, however, is the cost of the degree outweighs the salary increase.

“I don’t know if I could recoup my cost (for the degree) before I’m eligible to retire,” Ferguson explained, noting a single doctoral class at Mississippi State University runs around $1,500, plus the cost of dissertation hours and a $200 fee to take the Graduate Record Examination (GRE).

Despite her achievements and 19 years of experience in the classroom, she still doesn’t make what her husband, a community college instructor, made just five years into his career.

So, she currently works weekends at a local restaurant and as a mentor for the World Class Teaching Program at the University of Mississippi, where she mentors teachers who are candidates for National Board certification. Her husband also works a second job as a part-time adjunct instructor for Mississippi State University.

Emily Speck, her boss and school principal, said she is an “outstanding” teacher.

“She is passionate about students and it shows in her classroom,” she said.

But she must direct some of that passion to making enough money to pay for her children’s extracurricular activities, go on vacations and sometimes simply pay the bills.

Recent reports from the Southern Regional Education Board and Mississippi First revealed startling data about teacher salaries. Take-home pay for new and even mid-career teachers is extremely low compared to neighboring states, according to the SREB’s teacher pay dashboard that uses data from the 2018-19 school year.

In turn, there’s been a 32% decline in graduates of educator preparation programs from 2013-2014 to 2017-2018, and the out-of-state pipeline of teachers has diminished almost entirely with a 96% drop in four years, according to the Mississippi First report. In short, fewer college students are choosing teaching as a career, and educators coming from out of state have declined to almost nil.

In Mississippi, teachers are paid primarily with state funds. The average salary for a classroom teacher this school year is $46,862. Some districts also include supplements from local tax dollars, and additional stipends are available for teachers in certain underserved areas.

The report concludes the declining value of teacher salaries coupled with the rising cost of college attendance could be responsible for the state’s teacher shortage. Current proposals to raise teachers’ annual salary by $1,000 do not come close to the $3,000 across-the-board raise, plus an additional stipend for teachers in certain areas of the state, the report says is needed to make a difference.

Two young, single teachers, who spoke anonymously for fear of retribution in their jobs, work additional jobs to make ends meet — including paying off student loans.

“This is my 7th year teaching, and I’ve (worked additional jobs) every year,” one said, noting she works as a bartender and waitress two to three days a week.

She’s still paying off her student loans from college, though a special grant covered the costs of her master’s degree. In addition, she has a large family that occasionally depends on her for support, particularly since her dad has fallen ill with a terminal disease and is unable to work.

Another fellow teacher, who has some financial support from her family and fewer student loans, still works extra jobs to survive financially.

Both teachers know they are meant to be in the classroom. They both say the same thing about their first year teaching, which can often be a challenge.

A few months into their first semester, they both say they had hit their stride.

But the financial stresses make it difficult, and they often wonder how they will be able to make it work with a family.

“I always pictured myself more ‘settled’ by now,” said the 29-year-old teacher. But her only day off every week is Sunday, and that doesn’t leave much time for a personal life.

Ferguson, a mother of three who decided to become a teacher partly because of what she described as a “family friendly” schedule, said the more years that pass, the less true that becomes of the career.

“Every year it’s gotten a little bit more demanding, and even more so this year with virtual teaching, online learning platforms and everything we’ve had to learn so quickly. I love what I do … but unfortunately there’s not a lot of reasons to stay with it, especially for young (people) coming out of college,” she said, noting other benefits have dwindled as well. “When I first started, you only had to work three years to be vested in the retirement system. Now it’s eight.”

A 13-year veteran teacher in a Delta school district, who also spoke off the record to protect his job, said he and his wife make their finances work with strict budgeting.

But he also spoke of extra costs that fall on districts like his — especially during the pandemic.

He said his district told teachers last semester they couldn’t use their procurement cards for classroom supplies for disinfectant and hand sanitizer, and the district didn’t provide enough to make him and his students feel safe.

Then there are the needs of the students in a low-income area even without the added pressures of the pandemic.

“Our kids need so much stuff, especially in the Delta,” he said, noting how he spends his personal money buying things like snacks and book bags for his students.

One teacher was working her second job as a bartender at a wedding and struck up a conversation with a guest.

“I told him I was a teacher and he said, ‘My daughter wanted to do that, but I told her no, the only way you can make it (as a teacher) is if you have another income,’” she recalled. “I wanted to argue with the man but there I was, working my second job.”