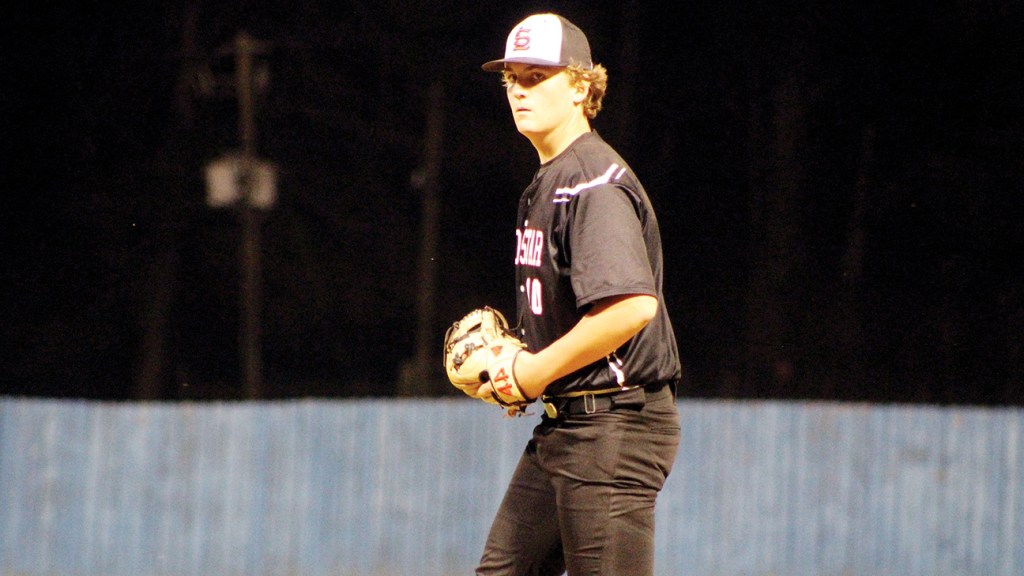 Photo by Cliff Furr Senior right hander Craig Bass of Loyd Star looks to the plate Monday at Wesson. Bass came on in relief and struck out the final two batters of the game in a 10-1 win for Loyd Star. The two teams will play a varsity doubleheader at Loyd Star, weather permitting, Friday.

In a season where everyone in the division has a varying level of inexperience and youth in their starting lineups, it looks like the Loyd Star Hornets are the front runner in Region 7-2A baseball.

Monday, the Hornets got 10 hits at the plate in a 10-1 win over division rival Wesson. Loyd Star is now 5-5 overall and 4-0 in the division after sweeping a three-game series last week from Bogue Chitto.

The loss drops Wesson to 3-6 overall and 3-1 in Region 7-2A. The Cobras opened division play last week with a sweep of West Lincoln in their three-game series.

On the mound he called on crafty junior southpaw Dawson Hester. Hester struck out 10 in six innings. He gave up just one hit and one unearned run on 99 pitches.

Out of the pen, Britt can use 6-foot-3 senior Craig Bass. Bass got the call Monday night and pitched the seventh inning. He only needed 11 pitches to finish things up as he got back-to-back strikeouts to finish the game.

“Dawson did a good job of locating his pitches early in the game and was able to throw his breaking ball at any point in the count to keep them off balance,” said Britt. “He had the stomach virus the night before, so I was very happy about his performance — I know how draining that can be.”

Sophomore catcher Casen DeHart was a monster at the plate for Loyd Star. DeHart had a double, a home run and drove in four runs on the night.

Hux, Easterling and Caleb Smith each also had a double apiece for Loyd Star as well. All three also drove in two runs each.

Sophomore Blake Thornton had two hits for LS while Hodges, Connor Cunningham and Carter Holcomb all also hit safely for the Hornets.

Wesson will still have left-handed junior Brett Boutwell and Loy to throw at Loyd Star when the teams meet later in the week — weather permitting.

“I told them after the game that they’ve just got to believe in themselves, because I believe in them,” said Windom. “We’re a good team and work too hard not to show it.”

The teams are scheduled to meet again Friday at Loyd Star for a doubleheader. First pitch is set for 4:30 p.m.