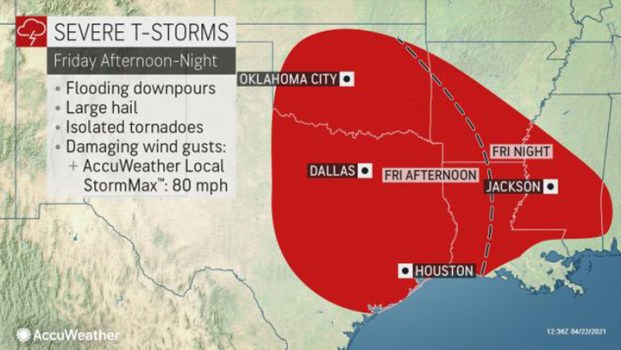 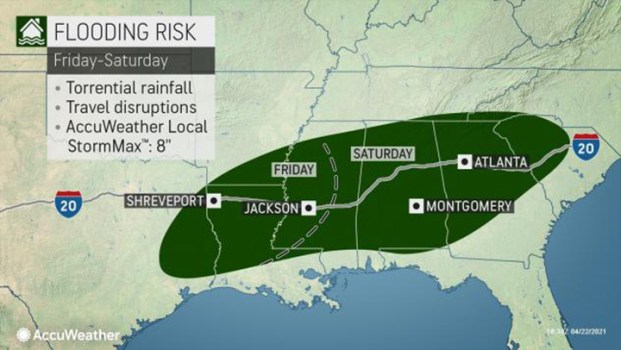 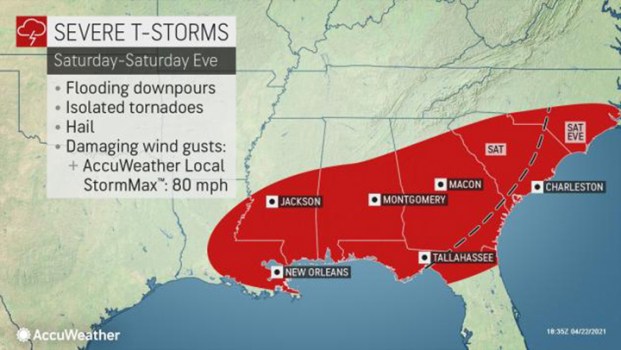 “Warm, moist air will flow from the Gulf of Mexico and collide with a warm front pushing through the southern Plains,” said AccuWeather Meteorologist Mary Gilbert. “This collision can have explosive results over portions of Texas, Oklahoma, Louisiana and Mississippi.”

As storms initially develop, individual thunderstorms will have the potential to rotate, and there will be a risk for isolated tornadoes. The threats will evolve as storms are likely to eventually become a more organized line.

“Damaging wind gusts, hail and downpours will be the most prevalent threats with any strong storm,” Gilbert said.

Although the thunderstorms are expected to be fast-moving, rain may fall quickly and heavily enough to cause localized flooding. In the heaviest downpours, up to eight inches of rain could be achieved Friday into Saturday.

Those planning to travel Friday night must be extra cautious, as the depth of water is hard to gauge at night. Motorists should never cross a flooded roadway, day or night. When encountering a flooded area, turn around and find an alternate route.

“Those traveling at higher speeds across portions of interstates 10, 20 and 35 will need to reduce speeds during any downpours to prevent hydroplaning,” Gilbert said.

She explained that while flash flooding most often strikes low-lying and poor drainage areas first, no area is truly exempt from the risks of heavy downpours.

Thunderstorms are expected to continue to move eastward Saturday across the southern portions of Louisiana and Mississippi, into Alabama, Florida, Georgia and South Carolina.

AccuWeather meteorologists are watching for another round of severe weather early next week as a potent storm takes shape over northern Texas and tracks east. The storm’s cold front will trigger the threat for torrential downpours, potentially damaging wind gusts — and moisture from the Gulf of Mexico will add fuel to the thunderstorms that ignite.

As the next system tracks farther to the east by the middle of next week, the threat for severe weather will increase over the Mississippi Valley and northwestern Gulf Coast area.

Many residents in the South recall “the spring of 2011 as one of the most active springs in recorded history for severe weather, especially April with over 700 tornadoes, but it was a later start to that tornado season,” extreme meteorologist Reed Timmer said.

Similar to 2011, the start to severe weather season has been slow to develop across the United States with AccuWeather meteorologists expecting spring severe weather to turn more active in the coming weeks.

Only 34 tornadoes touched down in the U.S. since April 1 as of April 20, according to the Storm Prediction Center. On average, 224 tornadoes occur during April in the U.S.

Forecasters say the latest data is pointing toward April closing with a below-average number of tornadoes. But, AccuWeather Lead Long-Range Forecaster Paul Pastelok predicted that as the calendar flips to May severe weather will ramp up.