Tornadoes cause damage in Mississippi; Tupelo hit at night 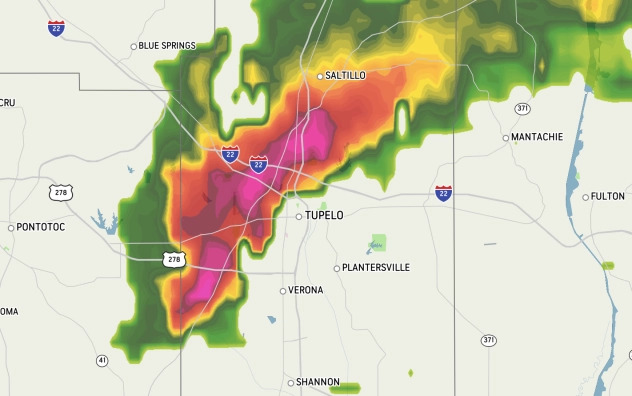 (AP) — Multiple tornadoes were reported across Mississippi on Sunday, causing some damage but no immediate word of injuries.
A line of severe storms rolled through the state Sunday afternoon and into the nighttime hours. Late Sunday, a “tornado emergency” was declared for Tupelo and surrounding areas. Meteorologists urged residents to take cover.
“Damage has been reported in the City of Tupelo,” the mayor’s office said in a Facebook post just before 11 p.m. “Emergency crews are currently assessing the degree of damage. Please do not get out and drive.”
Photos retweeted by the National Weather Service in Memphis showed several downed trees and power lines. Tupelo Middle School sustained some damage, as well as houses and businesses.
There were multiple reports of damage to homes on Elvis Presley Drive, just down the street from the home where the famed singer was born. Presley was born in a two-room house in the Tupelo neighborhood but there was no indications that the historic home sustained damage. It’s now a museum.
But just down the street on Elvis Presley Drive, a tornado tore the roof off the home of Terrille and Chaquilla Pulliam, they told the Northeast Mississippi Daily Journal. About 10 family members took shelter inside the house, and “we got everybody inside in time,” Terrille Pulliam said.
Calhoun County Sheriff Greg Pollan said Calhoun City also “was hit hard tonight.”
“Light poles have been snapped off. Trees in a few homes. Trees on vehicles. Damage to several businesses. Fortunately we have had no reports at this time of injuries,” Pollan posted on Facebook, asking people to stay off the roads. “Emergency personnel are working feverishly to open the roads as quickly as possible.”
News outlets also reported tornados near Yazoo City, Byram and Tchula earlier in the day. The National Weather Service in Jackson shared several images of funnel clouds across different parts of the state.
More storms are in store for parts of Louisiana, Mississippi, Alabama and Georgia on Tuesday, forecasters said. Tuesday’s storms could bring wind gusts of up to 70 mph and hail to the size of golf balls, said the National Weather Service in Jackson, noting that “tornadoes are likely Tuesday into Tuesday evening” in parts of Mississippi.