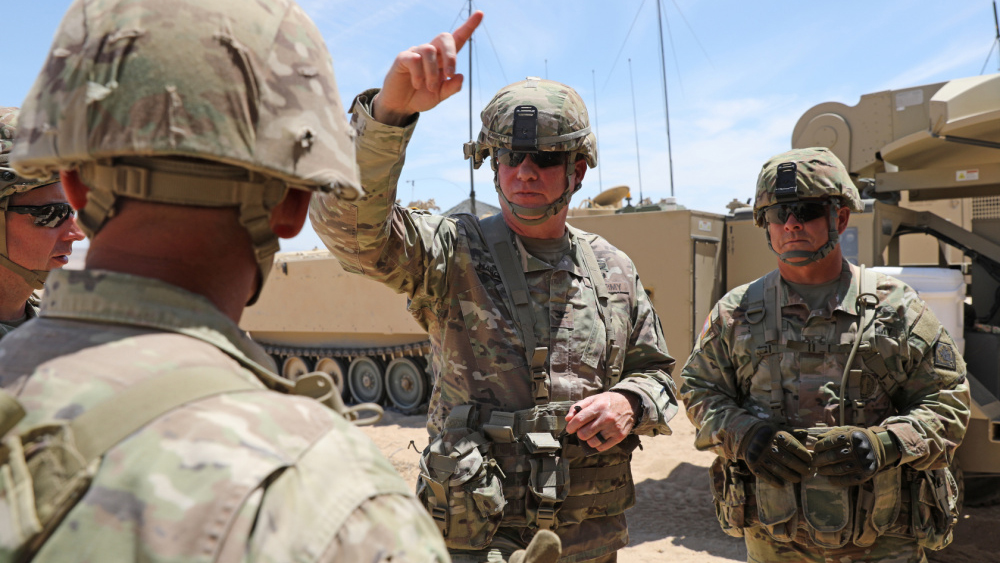 Soldiers from units across Mississippi are conducting their annual training with the Mississippi National Guard at the National Training Center at Fort Irwin, California now through the month of June.
The MSNG is a lethal, relevant and ready force. They are prepared to deploy for missions in Mississippi and beyond when our Nation calls. The 155th is one of two Army National Guard fully modernized brigade combat teams in the U.S. Army and is the largest unit in the Mississippi National Guard with approximately 3,850 Soldiers (including Kansas’ 1-635th Armor Regiment). The brigade’s 1st Battalion, 155th Infantry Regiment is the sixth oldest infantry regiment in the U.S. Army and is known as the “Mississippi Rifles.”

The Magnolia State’s NTC rotation is designed by the U.S. Army’s Total Force Policy training guidelines.  Mississippi is just one of several states serving together executing joint training focused on realistic scenarios designed to challenge a multitude of military occupational specialties and diverse units from across the state and nation to include but not limited to:
.       184th Sustainment Command – Monticello

“The Mississippi National Guard’s training at the National Training Center offers a Total Force training opportunity focused on testing our systems and skills so that we can communicate, move down range, and order equipment and supplies in an austere environment,” Boyles said. “The training is realistic and prepares our soldiers, airmen, and leaders for any mission at home or abroad.”

National Guard readiness relies on well-considered planning, expertly trained personnel and the willingness to respond to the nation’s needs at moment’s notice. Cmd. Sgt. Maj. Silvester Tatum, the Mississippi National Guard senior enlisted leader, got a firsthand look with MSNG senior leaders during a recent visit to NTC as our personnel focused on the beginning phases of training.
“Ensuring readiness and resiliency for our Soldiers is a primary task. To maintain readiness requires our soldiers and airmen to be deployable, sustainable and interoperable with our active duty comrades,” said Cmd. Tatum.  “A rotation at the National Training Center enhances our readiness across the state.”
An NTC rotation replicates the tough, realistic operational environment that America’s war fighters face in combat; the training is relevant and quickly adaptable to emerging threats and technologies in today’s current operational environments and for tomorrow’s challenges. The training is reflective of the complexities of potential adversaries our nation could face to include: guerrilla, insurgent, criminal and near-peer conventional forces woven into one dynamic environment. The NTC rotation allows the 155th, and supporting units to build teamwork and maintain combat readiness for future missions. Total force training benefits include increased individual soldier and collective battle staff proficiency, standard operating procedure exchanges, and stronger cross component relationships.
The 155th is developing those partnerships with the Kansas National Guard’s 1st Battalion, 635th Armor Regiment as a member of its formation during NTC
2021. The National Guard is unique with the diversity of our professional soldiers and airmen and the experience and expertise they bring to the Total Force.
Monticello’s 184th Sustainment Command is the lead command element in Joint Task Force Magnolia assisting the deployment process for the 155th ABCT’s 2021 NTC rotation.  It is one of the U.S. Army’s 13 sustainment commands and one of two in the National Guard. The 184th helps to build combat power and maintain readiness. Without sustainment, units cannot engage and defeat our adversaries. The 184th and partner elements facilitated the movement of over 4,000 MSNG personnel and 800 vehicles to Fort Irwin for the 2021 NTC exercise.
“Our Mississippi Soldiers and Airmen are fully prepared to complete and support combat operations training at the National Training Center,” said Boyles. “This NTC rotation will display the Mississippi National Guard’s robust talent, joint capabilities, and commitment to national defense.”
Members of the MSNG will complete their NTC rotation by the end of June.  MSNG soldiers and airmen are true professionals dedicated to the safety and security of our state and nation.