Omadawgs headed back to World Series 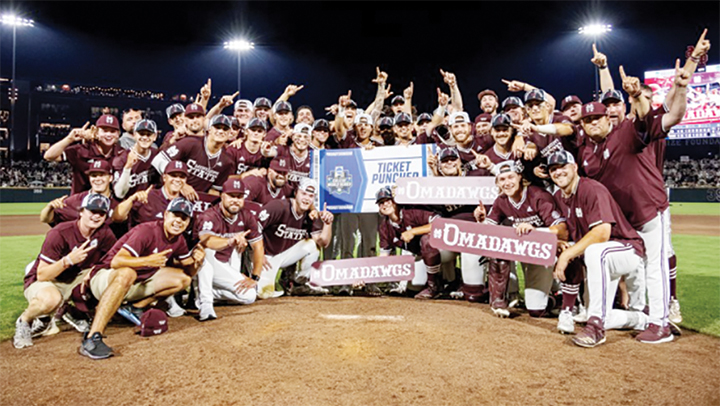 Photo by MSU Sports Info The Mississippi State baseball team poses for a picture on Dudy Noble Field Monday after beating Notre Dame in the NCAA Super Regionals. MSU will be one of eight teams vying for a national championship beginning Saturday at the College World Series in Omaha, Nebraska.

Mississippi State took Notre Dame’s best shot Sunday as the Irish won game two of the NCAA Super Regional in Starkville 9-1 to tie the series at one game apiece.

Monday, playing in front of a packed Dudy Noble Field, the Bulldogs and coach Chris Lemonis delivered in a big way as the home team built a large, early lead on their way to an 11-7 win that clinched a third straight trip to the College World Series in Omaha.

It’s the 12th time in program history for MSU to make the nearly 900-mile trip north to Omaha and that three-season streak is best in the nation.

Lemonis took State to the CWS in 2019 in his first year at the school after being hired away from the University of Indiana. The Dogs beat Auburn in their opener that season via a four-run 9th inning before being eliminated by a pair of losses to Vanderbilt and Louisville.

This MSU team has lived up to high expectations for much of the season as their record currently sits at 45-16.

There may have been some panic among the faithful around the SEC Tournament as the Bulldogs made a quick exit from Hoover after a pair of big losses to the University of Florida and Tennessee.

That was quieted though when MSU cruised through their opening regional weekend with a 3-0 record to set up the matchup against Notre Dame.

Lemonis and baseball media that cover the sport called the Fighting Irish one of the hottest teams in the country ahead of the series and Notre Dame lived up to that hype.

They led 7-3 at one point in the opener before MSU answered every run with one of their own to take a 9-8 victory. The teams combined for 22 hits in that game.

Game two saw ND get a gem from starting pitcher Aidan Tyrell as he went 7.1 innings and gave up five hits and one run while striking out six in the win.

The crowd at Dudy Noble was a record setter all weekend. The opening night saw MSU set a record with 14,385 fans in attendance, the largest on-campus postseason crowd in NCAA history.

With over 11,000 fans at each game, the total attendance of 40,140 for the series was also the highest in NCAA history for an on-campus, three-game series.

Notre Dame jumped out 1-0 after a solo home run by Ryan Cole Monday. MSU responded with an RBIs ingle by Luke Hancock to tie the game at 1-1- in the bottom of the first.

The ocean of maroon and white got a chance to cheer their loudest in the second as the Dogs batted around in the frame while staking a 7-1 lead. A 3-run home run by Logan Tanner was a highlight of the big half inning.

Tanner would also hit a solo shot in the third inning, his 10th of the season.

The Irish didn’t stop fighting though as they made the game 11-7 in the top of the seventh on a Niko Kavada 2-RBI home run.

Lemonis went to his closer Landon Sims to shut down any hopes of a Notre Dame miracle. The sophomore threw the final two innings and struck out three to claim his 10th save of the season.

MSU fans across the state can use the next few days to make travel arraignments as the team plays their CWS opener on Sunday at 6 p.m. Their opponent will be the University of Texas Longhorns.

Texas and Mississippi State met in the season opener for both teams way back on February 20. The Dogs took an 8-3 win that day in Arlington at the State Farm College Baseball Showdown.

The Longhorns went 0-3 that weekend with other losses to Arkansas and Ole Miss. They are 5-0 in NCAA tournament play this year though as Texas (47-15) swept South Florida in a Super Regional played in Austin.

The winner between MSU and Texas will play the winner of Virginia versus Tennessee. The losers of those two games will also meet in an elimination game.

The other side of the CWS bracket includes Vanderbilt, Arizona, Stanford and NC State as all four of those teams will be in action Saturday when tournament action begins with NC State and Stanford playing at 1 p.m.